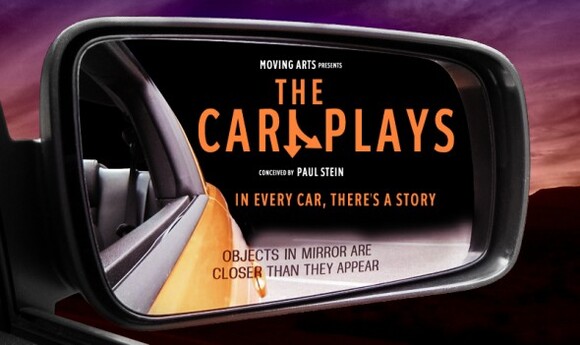 The Car Plays are an environmental event featuring short plays simultaneously performed inside fifteen parked cars on the Community Plaza at the Segerstrom Center in Orange County California.

The extraordinary “Car Plays” features five cars with three rows of five cars each; each row representing a cycle of five plays. Audience members move from car to car to see all five plays in one row and cycle. With actors and audience sitting side by side in the front or backseats, Car Plays creates a new performance model of voyeuristic intimacy as it explores LA’s car-obsessed culture.

The Segerstrom Center for the Arts was previously called the Orange County Performing Arts Center. It is the largest non-profit arts organization and presents a wide variety of the most significant national and international productions of music, dance and theater to the people of Southern California.

The 2012 MINI Countryman is a very safe car that handles, like all MINI Coopers, a go kart. The Mini Countryman is a four door car that has seven airbags and air curtains. Its performance suspension provides the lowest chance of collision possible.

The MINI countryman has four bucket seats, built-in navigation, and a surprisingly large cargo space with a center-mounted speedometer that makes it ideal for long tours. The 2012 MINI Countryman is also a roomy car, that is still compact by industry standards.

"Crevier MINI is very excited to supply five brand new 2012 MINI Cooper Countryman's for use in the play" states Peter Maldonado. "The Segerstrom is a beautiful facility and being part of the Off Center Festival is an honor." Peter concludes.

Learn more about the Segerstrom http://www.scfta.org/home/default.aspx

Refreshed 2015 MINI Countryman and Paceman to Arrive This Summer