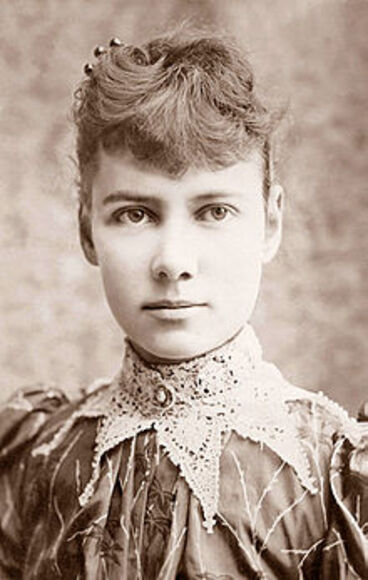 “Suffragette,” the film from the U.K. with Meryl Streep in a starring role, is slated for international release in October. And the production “10 Days in a Madhouse: The Nellie Bly Story” (Pendragon Pictures) is scheduled for a late September 2015 release.

While commentators are already speculating about the Oscar potential of “Suffragette,” it’s too soon to tell about the future of the independent production “10 Days in a Madhouse,” according to Marguerite Kearns, host of Suffrage Wagon Cafe that's featuring the 2015 film in its festival celebrating the cafe's opening. The Nellie Bly film stars Caroline Barry, Christopher Lambert, Jullia Chantrey, and Kelly Le Brock. It's about the investigative reporting of Nellie Bly (1864-1922). The film is written and directed by Timothy Hines.

The production focuses on Bly’s reporting for the New York World that was published in a book in 1887 based on her undercover work at the Women’s Lunatic Asylum on Blackwell’s Island, New York City.

Nellie Bly’s reportage has been included in the opening programs of Suffrage Wagon Café because of the importance of the nation's early press women, a subject explored during the cafe festival. The four-day event is part of a “Spirit of 1776” campaign to restore women’s experiences and accomplishments to their rightful place in American history. Marguerite Kearns, host of Suffrage Wagon Café, says that there’s considerable public attention being given to women’s history and the 72-year campaign for American women to win the right to vote. But she says there's a long way to go before the nation's 2020 suffrage centennial observance.

“If a woman runs for the office of U.S. president in 2016, there will be more interest than ever in how American women struggled for the ballot,” Kearns said.

The café’s opening is part of the SWAN Day observance that’s celebrated around the world. Suffrage Wagon Café (http://www.suffragewagon.org/?page_id=9448) is associated with Suffrage Wagon News Channel, a multi-media information and entertainment platform that has been publishing since 2009. (http://SuffrageWagon.org)

“We’ve packaged news of the film ‘10 Days in a Madhouse’ with Nellie Bly’s original writing that’s available online,” Marguerite Kearns continued. “These documents are perfect for personal and home use, as well as for educators interested in expanding their curriculum planning.”

Digital resources include a video produced by Suffrage Wagon Café and a selection from Nellie Bly’s writings available on Suffrage Wagon’s Soundcloud audio channel. Bly’s published writings about her ten days in a mental hospital are in the public domain.

Café host Marguerite Kearns says that the accomplishments of America’s early press women are not well known. She believes a film like “10 Days in a Madhouse” will bring to public attention numerous suffrage activists like her grandmother, Edna Kearns, who took advantage of news media outlets to spead their message of equality and women's rights. Over the course of the 72-year suffrage campaign to win the vote, many grassroots activists trained themselves as reporters, Kearns said.

“My grandfather Wilmer Kearns, my grandmother Edna Kearns, and their young daughter Serena Kearns took off on foot on a freezing January morning in 1914 to head from New York City to Albany, NY with suffragist Rosalie Jones and others. They were determined to see the governor and gain his support for women voting. Only a few made it to the state capitol. The march or ‘hike’ generated considerable press coverage, and it is representative of the ability of these activists to make a dramatic impact in public and keep their cause in the news.”

Kearns continued: “By celebrating Nellie Bly’s investigative reporting, we’re also recognizing hundreds of suffragists across the nation who understood the importance of communicating their message through newspaper outlets. They learned reporting skills as they hit the ground running.”

Suffrage Wagon Café will continue covering news and views of women’s history after the four-day festival’s conclusion. Part of the café festival is a feature on women’s rights activist Dr. Helen Pankhurst who is the granddaughter of English suffragette Sylvia Pankhurst. Dr. Pankhurst's great grandmother was Emmeline Pankhurst, the matriarch of the English suffrage movement. Meryl Streep will play Emmeline Pankhurst in the “Suffragette” film scheduled to open in October 2015.

Vintage women’s suffrage movement music is also part of Suffrage Wagon Café’s opening festivities. This music includes Elizabeth Johnson’s performances of “The March of the Women” and “In Her Sphere.” Both are available on Suffrage Wagon’s Soundcloud audio platform.

The Suffrage Wagon Café’s opening festival also highlights a program about the anti-suffrage movement or those who opposed women voting, as well as the award-winning music video, “Spirit of 1776: A New Suffragette Anthem,” written by songwriter Eighty Bug and performed with the Suffragist Sisters. The music video was directed by Edwin Carungay and Lesha Maria Rodriguez (https://youtu.be/Aga11k5s0Bc) .

The music video celebrates the “Spirit of 1776” suffrage campaign wagon used by activist Edna Kearns in New York City and Long Island in 1913. The wagon that's in the collection of the New York State Museum will be on exhibit during New York's suffrage centennial celebration in 2017 at the state museum in Albany, NY.

Suffrage Wagon Café and Suffrage Wagon News Channel are partners with the multi-media platform Suffrage Centennials (http://SuffrageCentennials.com), an online information and entertainment blog highlighting suffrage centennial trends, events, and celebrations. American women will celebrate 100 years of voting in 2020, the anniversary of the ratification of the 19th Amendment to the U.S. Constitution in 1920.