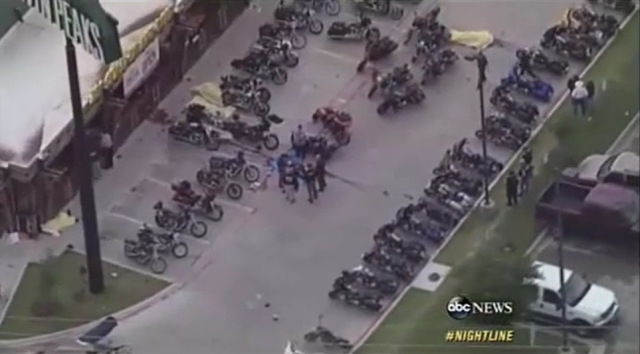 Texas criminal defense attorney says affidavits requesting search warrants in the arrests of 177 bikers were “fill in the name documents.”

A Texas based criminal defense attorney who obtained copies of the warrants issued on June 12 to search the mobile phones of bikers arrested in connection with a shootout in Waco in May says the warrants appear to have lacked probable cause. During the incident on May 17, a reported 177 bikers were arrested. According to a recent report from Justice News Flash, attorney Clinton Broden of the Dallas based criminal defense firm Broden, Mickelsen, Helms & Snipes LLP says the information on the affidavits requesting the warrants, as well as the criminal complaints used in the multiple arrests were “fill in the name documents” that failed to specify individual probable cause.

In the documents, Broden says there is also an admission that police bullets struck multiple members of motorcycle clubs who were present during the May 17 incident signed under penalty of perjury by a Waco police detective. Waco Police Chief Brent Stroman; however, subsequently stated during a press conference held after the documents were signed that it was “undetermined” whether police fire hit any of the bikers and the matter remained “under investigation” at the time.

Broden is representing one of the individuals arrested in the case, Matthew Clendennen. The Justice report notes that he requested the return of his client’s cell phone while having a conversation with a Waco police detective on May 28, but was told that the device was being searched pursuant to a search warrant. Upon learning that the warrant for searching the mobile phone had not been obtained until June 12, Broden said, “I was lied to by the Waco police.”

Former State District Judge Michael Snipes, who joined Broden, Mickelsen, Helms & Snipes LLP in January 2015, further stated of the affidavit used in support of the search warrant for Clendennen’s phone that there is no probable cause documented on the warrant that implicates him in a crime. Says Snipes, “He is not even mentioned in the body of the affidavit… The search warrant does not pass constitutional muster.”

The attorney further stated “One would have hoped that Waco and McLennan County officials would have learned from the fiasco surrounding the 177 arrests in this case that affidavits in support of warrants must be tailored to the individual, yet, almost a month later, they are still using fill in the name affidavits”

“The Bill of Rights, including the Fourth Amendment, was enacted more than 223 years ago and the United States Supreme Court decided the case of Ybarra .v Illinois more than thirty-five years ago… Apparently Waco and McLennan County have still not gotten the message.”

The Supreme Court determined in the case decision in 1979 that when the search or seizure of an individual must be supported by probable cause with respect to the particular person where probable cause is the standard. In the court’s announcement, it was noted that the coincidental existence of probable cause is not acceptable.

Broden is urging the Waco Police Department to be truthful in reporting on the matter to the public, and has called for more transparency stating, “The Waco police seem unwilling or unable to tell the public the truth which is why the Department of Justice must intervene in this case.”