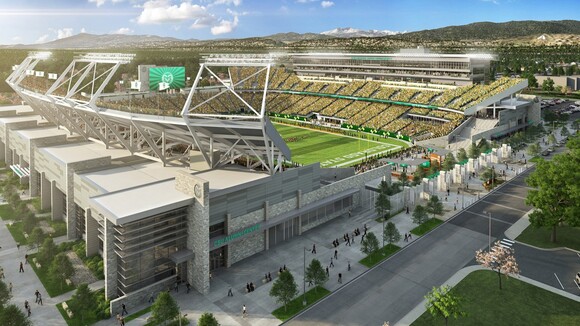 Lerch Bates, an employee-owned international consulting firm for vertical transportation, façade access, and logistics, has been selected to design the vertical transportation systems of Colorado State University’s (CSU) new on-campus multi-purpose stadium. The $220 million facility and adjacent $18 million academic space are scheduled to open in time for the 2017 football season.

The stadium, currently under construction between Lake and Pitkin streets on top of Meridian Avenue in Fort Collins, will include nine elevators and will feature a capacity crowd of more than 40,000 fans including standing-room-only, 36,000 seats, 150 indoor club seats, 800 outdoor club seats, 40 loge boxes and 22 suites with each having a capacity of 16 guests. The contemporary facility also will serve as a cornerstone for CSU’s athletic department, housing office and administrative space including football offices as well as training and competition space for several sports. Additional facilities will house the university’s Alumni Center, modern classrooms and the Center for Advising and Student Achievement. Additionally, CSU’s new stadium will provide flexible space for campus events and convocations and year-round hospitality facilities for small gatherings and functions.

“CSU athletics is going through an exceptional renaissance with more than $250 million allocated to athletic facilities upgrades,” said Lerch Bates Area Vice President – West Jeff Marsh. “The new stadium will continue the Rams tradition of excellence by providing a modern fan experience that will be unique in the region. Lerch Bates is thrilled to be a part of a project that represents the best of Colorado and the Rocky Mountain West.”
CSU currently plays football at Sonny Lubick Field at Hughes Stadium located at the base of the foothills west of the university’s main campus. Opened in 1968, Hughes Stadium seats 32,500 fans and was named after Harry W. Hughes, the head coach for 31 seasons for the then-named Colorado Agriculture and Mechanical College. The last varsity football game played on the Colorado State University campus, at Colorado Field, was a 43-11 victory over Wichita State on November 25, 1967.
Lerch Bates announced in 2015 that it was selected to design the vertical transportation systems for Mercedes-Benz Stadium, the new home of the Atlanta Falcons of the National Football League (NFL) and Atlanta United FC of Major League Soccer (MLS). The focal point of the $1.4 billion multi-purpose stadium will be the eight massive triangular roof pieces that will run on individual tracks to open and close. Mimicking a camera shutter, the moving roof will be unique among sports stadiums and is expected to make the facility an instant icon in Georgia’s capital city. The stadium broke ground on May 19, 2014, and will replace the aging Georgia Dome, home of the Falcons since 1992. Mercedes-Benz Stadium is expected to be completed in 2017 and will be the home of Super Bowl LIII.
Lerch Bates also designed the complex façade access system of Golden 1 Center, the new home of the Sacramento Kings (NBA). The $507 million publicly owned facility is part of a new business and entertainment district called Downtown Commons, DoCo, that will include a $250 million 16-story mixed-use tower. Golden 1 Center is scheduled to open October 2016.
The vertical transportation, façade access and logistics firm also were chosen by MANICA Architecture to design the vertical transportation and façade access systems for VTB Arena in Moscow, Russia. The massive project, one of the largest projects currently being developed in the Russian Federation, will include the construction of Dynamo Central Stadium and an indoor arena within a single building enclosure. The $1.5 billion sports and entertainment complex features a honeycomb patterned skin that will envelop the 27,000-seat soccer stadium and a 15,000-seat multipurpose arena. Completion is expected in 2017.
Denver-area based Lerch Bates, with 35 offices worldwide, has built a reputation as the premier designer of vertical transportation and façade access, permanent equipment and rigs utilized for servicing exterior façades including window washing and maintenance, systems around the globe. The company has consulted on many of the world’s tallest buildings including the 2,717-foot (428-meter) Burj Khalifa in Dubai, United Arab Emirates, 1,667-foot (508-meter) Taipei 101 in Taipei, Taiwan, 1,476-foot (450-meter) Nanjing Greenland Financial Center in Nanjing, China and 1,389- foot (423-meter) Trump International Hotel & Tower in Chicago, Illinois.
ABOUT LERCH BATES
Lerch Bates was founded in 1947 and has advised architects, developers, building investors, owners and managers in the design, sustainability and continuous use of a wide spectrum of building systems for any size or type of building. Headquartered in metropolitan Denver, Colo., Lerch Bates is an international consulting service firm with offices throughout North America, Europe, Asia, the Middle East, and India. Lerch Bates operates Lerch Bates Asia Pacific Limited, a holding company in Hong Kong, Lerch Bates (China) Limited, a Wholly Foreign-Owned Enterprise (WFOE) in Shanghai, China, Dewar Partnership in the United Kingdom and Joseph Neto & Associates in New York City. For more information, visit LerchBates.com.
###