Santa Announces His Run for President of the United States 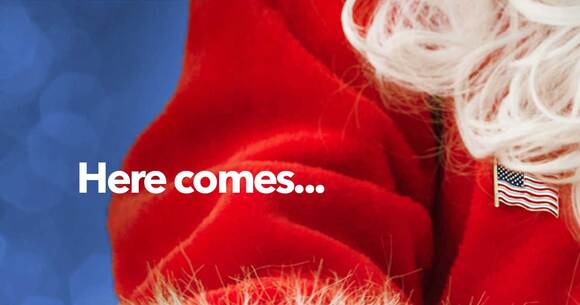 Santa Claus announced on Thursday via Facebook his intention to run for President of the United States (POTUS) in 2016. He will be running under the Christmas Party. “It’s time to turn the White House red and green. This November, I’m going to bring joy to the world, starting with Washington, D.C.,” Claus declared.

Next to major party candidates Donald J. Trump and Sec. Hillary Clinton, the man known as St. Nick is eager to provide a fresh perspective and tiny candy canes for every voter. His official candidacy page is www.SANTAforPOTUS.com.

Where does Santa stand on myriad vital issues facing our country and its citizens? Let’s take a look at his list of “naughty and nice” proposals, designed to bring good cheer in what is turning out to be a desperate time of need:

·       Foreign Policy: Just as we wouldn’t want coal in our stockings, we don’t want coal and other non-renewable energy sources to be the foundation of our energy plan. Not only does it create soot that’s impossible to wash out of a snazzy red coat, but the burning of fossil fuels is increasing the amount of CO2 in the atmosphere and melting the North Pole ice cap. Rising sea levels, catastrophic weather changes, and loss of elf habitat are all a very real threat to our planet. Now’s the time to replace dirty fossil fuels with clean renewable energy sources such as solar, hydroelectric and magic reindeer dust.

·       Health: Our country’s waistlines are a matter of national importance. Preventable obesity-related diseases are reducing our life spans, driving up healthcare costs and impacting the productivity our economy needs to compete. For Candidate Claus this is an issue of both national and personal importance. No more bellies that shake like a bowl full of jelly; President Claus will institute new nutritional guidelines encouraging boys and girls to replace glasses of milk and plates of cookies with a healthy mix of organic fruits and vegetables.

·       National Security: Santa knows when you are sleeping. He knows when you’re awake. He knows if you’ve been bad or good. But if you’re an enemy of America, President Claus won’t be just delivering coal. St. Nick is committed to making our nation and the entire world safer with a strong defense policy centered around improved intelligence. His proven ability to find out if you’ve been naughty or nice will be fully focused on ISIS, Al-Qaeda and threats to our security both foreign and domestic. This is the man who can stick billions of toys into a single sleigh and can fit himself through a chimney. If you don’t think he can deliver world peace, think again.

·      The Economy: If elected president, St. Nick will rely on centuries of experience managing the world’s largest toy production, logistics, and distribution facility to revive our economy and get Americans back to work. He knows what’s on the minds of hardworking Americans. It’s the same thing that’s on the minds of his hardworking elves. Making higher education affordable to all, improving access to quality healthcare, lowering taxes and reducing the high cost of reindeer chow are all economic initiatives the Claus administration will prioritize within the first 100 days of his presidency.

“Americans have sat on my lap and told me what they want: Leadership. Stability. Hope,” Claus said at his campaign announcement rally. “The cynicism of both major parties is tearing this country apart. I believe in a country not divided into the Red States and the Blue States, but a nation united in harmony as Red and Green States. Now is the time to make America jolly again!”

It was also announced that proceeds of Santa’s campaign for president will be donated to the North Texas-based nonprofit Heroes for Children. Heroes for Children provides social and financial assistance to families with children battling cancer.

“We are both honored and excited to have Santa’s support,” says Larissa Linton, executive director and co-founder of Heroes for Children. “It’s nice to know that we have a candidate who cares so much about children and families who are battling cancer.”

Until Nov. 8, Santa will be tweeting and posting his updates. He encourages everyone to check it out. As his bumper sticker says, he’s “A Lap You Can Trust.”

About Santa for POTUS

Santa Claus recently announced his candidacy for President of the United States. He has been the leader of the largest nonprofit in the world, distributing millions of toys to the deserving each year. He maintains a boisterous and joyful workforce, while successfully driving manufacturing at the North Pole. Now, as President of the United States, he promises to make America jolly again. For more information, go to www.SANTAforPOTUS.com or visit https://www.facebook.com/SANTAforPOTUS or https://twitter.com/SANTAforPOTUS.

SANTA For POTUS To Benefit Heroes For Children