Can You Fire Someone For Participating In Public Protests? 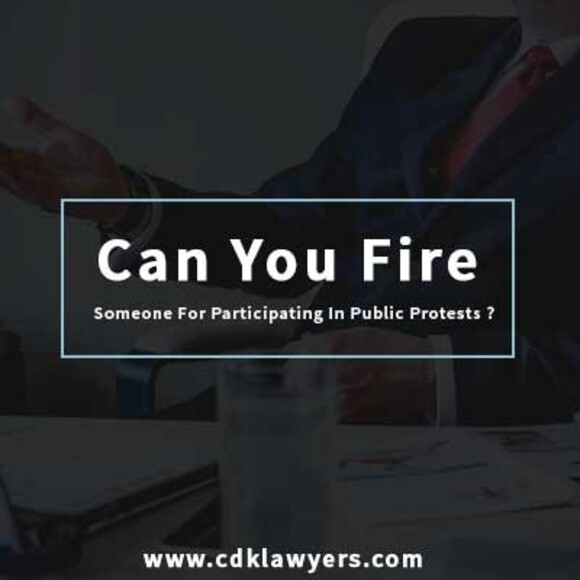 President Trump has recently spoken out regarding NFL players taking a knee during the national anthem, stating that NFL owners should fire the “sons of bitches” for “disrespecting the flag.” This statement has since sparked even more protests and further divided our nation’s culture war between those who protest the oppression of people of color and white supremacists who participate in rallies inciting violence, hate speech and racist attitudes. This division spawns questions regarding the rights of employers to terminate employees who participate in such public protests (whether it be supporting those who take a knee during the national anthem or attending a white supremacist rally). Dallas executive employment attorney Keith Clouse highlights some considerations under both state and federal laws for employers who are considering termination of such employees.

Most employees are traditional “at will” employees meaning they may be terminated at any time for almost any reason (so long as that reason is not unlawful - i.e. discriminatory). However, if employees have signed an employment contract, employers’ rights to terminate those employees are determined by the contractual terms in the agreement. Failure to terminate an employee per the terms of a contract can lead to breach by the employer, subjecting that employer to risk of litigation.

The First Amendment’s freedom of speech and association applies only to the government - meaning that government employees can not be terminated for participating in public protests. However, these protections do not apply to private employers. Therefore, under federal law, private sector employers may terminate at will employees for voicing political beliefs or participating in political activities that the employer deems offensive.

One other federal limitation is that employers may not discriminate against employees “on the basis of sex, race, color, national origin, or religion.” This law applies to both public and private sector employers. Accordingly, if an employee can show that his termination for participating in a public protest is connected with his or her race, that employee may have an argument that he or she is being subject to unlawful discrimination. This law is also important because employers have a duty to prevent and promptly correct harassment and discrimination in the workplace. Consequently, an employer who condones harassment or discrimination by allowing employees to voice racist remarks risks violating this federal law.

Although termination of many private-sector employees may be permitted under federal law, certain state laws could restrict private employers’ rights to fire such employees. For examples, some states have statutes prohibiting employers from discriminating against an employee for participating in “lawful off-duty conduct.” Additionally, some states, have adopted laws forbidding employers from terminating employees who exercise their First Amendment right to free speech. Employers may be able to circumvent these state laws if the employee’s off-duty conduct involves a violation of the employer’s workplace policies (i.e. non-harassment policy) or interferes with the employee’s ability to perform his or her job.

While the above are legal considerations for employers, there are also non-legal considerations employers must take into account prior to terminating an employee for participating in public protests. These include: potential reactions and repercussions of such action (i.e. how players, fans or other employees may respond), whether it could result in a potential strike by employees, the impact of firing (or not firing) someone based on their political views, what type of workplace attitudes the employer wants to promote, etc. Overall, an employer’s decision to terminate employees for participating in certain political activities should be done on a case-by-case basis after thoroughly evaluating the situation and all legal and non-legal considerations.

This article is presented by the Dallas employment lawyers at Clouse Dunn LLP. To speak to an employment attorney about a discrimination, harassment, or employment contract issue send an email to [email protected] or call (214) 239-2705.

For more articles like this on employment law visit http://dallasemploymentlawyer.cdklawyers.com/