There had to be someone who could show the rest of the world that we as a people are capable of doing things other than just entertaining and playing sports. 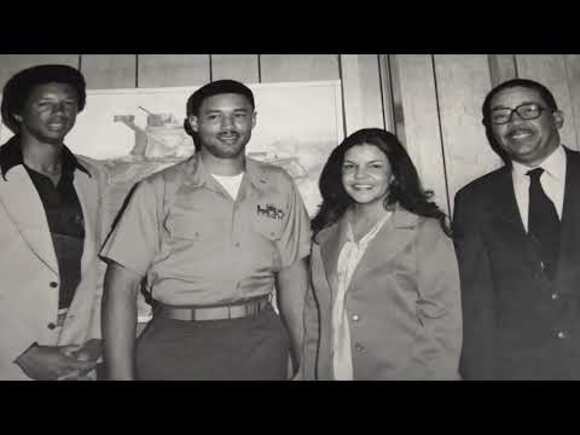 Johnnie Ashe was born in 1948 and raised in Richmond, Virginia along with his older brother, Arthur. Like many younger siblings, Johnnie admired his brother, who showed an early giftedness for academics and tennis. At a young age, he knew Arthur was destined to change the world for the better. Though both brothers were involved with tennis, Arthur decided to pursue it seriously. Succeeding in tennis would be his ticket out of racially segregated Richmond and would give him a platform to speak out against injustice.

By 1965, the nation was restless with racial strife and polarization over the Vietnam Conflict. Wanting to prove his own worth, Johnnie enlisted in the Marine Corps at age 17 and was soon sent to Vietnam. He served with the 1st Service Regiment and the 3rd Marine Amphibious Force.

In 1967, Johnnie was nearing the end of his tour, but was concerned about his brother’s safety. Arthur was also serving in the military as an Army lieutenant, performing data processing at West Point. Arthur had 15 months left in his contract, but now that Johnnie was back, it became more likely Arthur could get sent to Vietnam. Johnnie had heard of the so-called Sullivan Rule; while unofficial, the military discouraged brothers from serving in major conflicts at the same time. So, in 1968 during the height of the Vietnam Conflict, he requested to take another tour of duty and only told his father the real reason for his reenlistment – to avoid his brother having to go to Vietnam.

Arthur Ashe went on to become the first African American man to win at the US Open in 1968, the Australian Open in 1970, and Wimbledon in 1975. Johnnie recalled, “He called me at the barracks. What he said to me was…in a sense provocative for him, but it also told me that he had realized his responsibility. He said, ‘I'm a champion now. When I speak, people will listen.’" Arthur left not only a legacy in the tennis world but also made a global impact with his civil rights and AIDS awareness activism. Of his brother, Johnnie said, “There had to be someone who could show the rest of the world that we as a people are capable of doing things other than just entertaining and playing sports, because in those days that was the big thing that most people felt that we were good for.”

Johnnie made a career of the Marines, serving for 20 years and retiring as a Captain. He looks back on his time with the military with gratitude, saying, “I got to meet some fantastic individuals. I was able to rise in the ranks pretty easily. I was exposed to people from all over the world, different thoughts. The time that I spent in Okinawa and in the Philippines was definitely rewarding.” Johnnie now resides in Port St Lucie, Florida with his family.

NFM Salute is an initiative in which one military member or Veteran is chosen each month to be honored as the “Salute of the Month.” Salutes are chosen from nominations on the NFM Salute website, www.nfmsalute.com. The “Salute of the Month” will be featured on the website with a biography and information about his or her service, and NFM Lending will donate to a non-profit in the Salute’s name.

NFM Lending is proud to donate $2,500 to One Love Lenny Simpson Tennis and Education Fund on behalf of Johnnie. NFM looks forward to the opportunity to continue to honor military and Veterans through the NFM Salute initiative.

NFM Lending is a mortgage lending company currently licensed in 41 states in the U.S. The company was founded in Baltimore, Maryland in 1998. NFM Lending and its family of companies includes Main Street Home Loans, BluPrint Home Loans, and Freedmont Mortgage Group. They attribute their success in the mortgage industry to their steadfast commitment to customers and the community. NFM Lending has firmly planted itself in the home loan marketplace as “America’s Common Sense Residential Mortgage Lender.™” For more information about NFM Lending, visit www.nfmlending.com, like our Facebook page, or follow us on Instagram.

Chillbox Portable AC Reviews (Scam or Legit) - Is Chillbox AC Worth Your Money?

Do I Need a Los Angeles Business Attorney to Do Business?