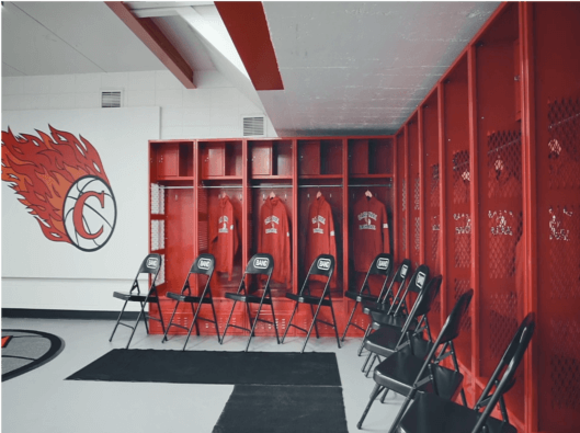 A heartfelt story emerges from the small Midwestern city of Eldon about what’s possible when a community comes together.

ELDON, Iowa, Sept. 28, 2020  -- “No way, wow!”, “That is a transformation!” exclaimed the students of Cardinal High School when their brand new locker room was revealed to them as a surprise. The Cardinal Comets are a basketball team in Eldon, a small city of population 950 in the Midwestern state of Iowa. The team’s locker room was in very bad shape - poor lighting, run down furnishing, and rusty-dented lockers. Students nicknamed it ‘The Dungeon’. It certainly was not a place that said ‘You are important’ to the students.

Coach Strasko wanted to change that. He found a way by teaming up with BAND. Coach Strasko and the Comets are a longtime user of the BAND app, which they use to communicate as a team every day. BAND wanted to give back to it’s users and was looking for a candidate for the ‘Surprise High School Makeover’, an original content series by BAND. Coach Strasko told his team’s story to BAND with a video of their old locker room and was selected by BAND.

Over a short 5-day period, BAND, Coach Strasko, as well as members of the Eldon community came out to help with the renovation, all while keeping it a secret from the students! There were bumps along the way. But every time, the close-knit Cardinal community came together to keep the renovation on schedule. Everyone wanted to lend a hand in providing the students with an experience they would never forget. Coach Strasko was able to quickly reach out to members of the community through BAND.

Coach Strasko is a caring coach that always pushes his players to become the best they could be. He has impacted his players and the Cardinal basketball program tremendously in the past few years. “I see these guys as my own.” said Coach Strasko. “A lot of these guys have seen hard times already. So they deserve to have things go right.”

On the final day, the brand new locker room was revealed to the players and they were ecstatic about their new home. The space was transformed into a NBA-style locker room with new furnishings, new paint, new flooring, and bold graphics and colors that represented the team in proper fashion. “I think this renovation is going to really impact kids, we want them to be proud of themselves and to believe in themselves.” said Athletic Director Chris Becker, who is also a parent of one of the players on the team. “I’m definitely going to remember this for the rest of my life.” said Dawson, who plays center for the Comets. The renovated locker room is a new symbol of the team’s trail-blazing future ahead and the change that is possible when everyone works together. “I want to say thank you to BAND because this is a life changer for many of my kids.” said Superintendent Joel Pedersen.

“Our goal at BAND is to support our users with a seamless way to communicate with each other,” said Brian J. Yook of BAND. “We’re thrilled to provide the Cardinal Comets basketball team with a locker room space that they can be proud of. We will always be rooting for the Comets. GO COMETS!”

The full length video can be viewed here: https://bit.ly/2GBIelC.

The BAND app is a versatile group communication platform that provides teams and groups with a private online space where they can chat, share, and organize together. BAND’s vision is to provide the best group communication experience possible by always listening to users and constantly evolving the service. BAND has been downloaded more than 100 million times, used by more than 300,000 leaders worldwide, and is available in 8 languages. BAND is a free platform and is available on Android, iOS, and desktop web. Download the BAND app here: https://go.onelink.me/d0IL/8b57399e