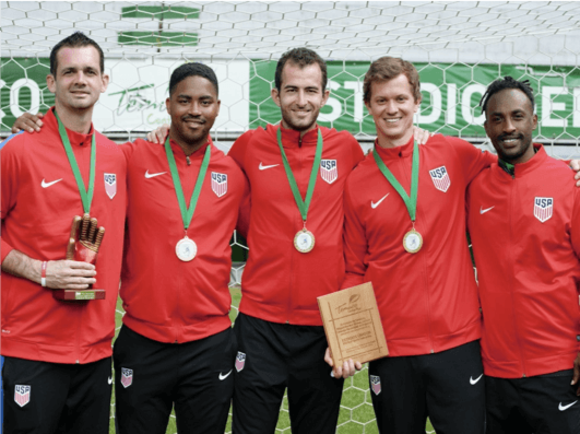 The US Men’s Deaf Soccer Team Took down Chile, Mexico, Brazil, and Argentina in the international tournament to bring home the gold.

For the team, the 2019 Pan American Games was the first time they had ever taken home a medal, much less a first-place trophy. At the 10-day tournament in Chile, the US team successfully faced off against four other countries, including Chile, Mexico, Brazil, and Argentina.

However, their victory did not come without its obstacles. Not only did they have to self-fundraise for each player to attend the tournament, but they also had to play all four games in four consecutive days. Moreover, the team was only able to have 2 in-person practices together in the year leading up to the competition. It seems like that winning was out of the questions, but they never gave up.

“One of the biggest things that keeps us going is just communicating with each other, whether we’re all together in person or we’re separated by thousands of miles.” Chris, Goalkeeper and Men’s Vice President, picked communication as a key factor that led the team to victory.

“I think it’s all about being on the same page and working toward the same goal from the first player to the 23rd player” said Centerback William. “I think one of the biggest things that our program has improved over the last few years is that communication aspect.” said Goalkeeper Chris.

The US Men’s Deaf Soccer Team uses BAND app for their communication. After adopting BAND, they felt more connected as a team. “I first started using BAND for my high school soccer team that I coach, and I noticed the kids becoming much more aware of announcements. It was just so much easier to get information out to them, so then I suggested it to our men’s national team.” Chris said.

The full story can be viewed here: https://bit.ly/Deaf-Soccer

The BAND app is a versatile group communication platform that provides teams and groups with a private online space where they can chat, share, and organize together. BAND’s vision is to provide the best group communication experience possible by always listening to users and constantly evolving the service. BAND has been downloaded more than 100 million times, used by more than 300,000 leaders worldwide, and is available in 8 languages. BAND is a free platform and is available on Android, iOS, and desktop web. Download the BAND app here: https://go.onelink.me/d0IL/e9550bfb

What are the soccer rules?