Forexsuggest noted the notorious high liquidity of the forex market 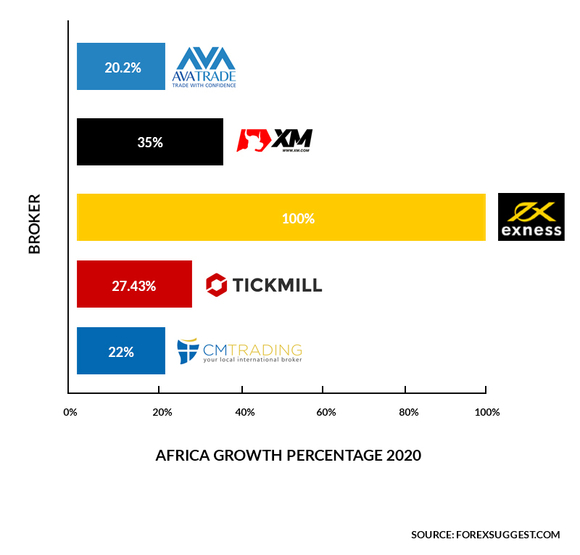 2020 has been a challenging year in all respects in Africa especially on the economic front but a 100% plus growth for some regulated brokers will definitely grab the attention of the global forex trading community.

Forexsuggest recently released statistics on the sustained growth of forex trading in Africa and the reasons driving the surge in forex trading volumes. The company attributed increased and strengthened trading on the continent to the economic fallout of the Covid-19 pandemic, improved telecommunications and the appeal of a highly liquid, lower transactional cost instrument.

It’s suggested that due to lockdowns on the continent as a result of the Covid-19 pandemic and subsequent attempts to curb the spread, a lot more people were confined to their homes to work remotely whereas others were left without employment, seeking alternative ways to secure an income.

Increased access to improved telecommunications, specifically the Internet, across Africa has for a while now brought in massive numbers of new forex traders who’ve signed up to trade on the established electronic trading platforms.

Lastly, Forexsuggest noted the notorious high liquidity of the forex market, low barriers to entry and comparatively low transactional costs make it possible for just about anyone with a computer and access to the Internet to trade forex via a retail broker.

Louis Schoeman from Forexsuggest.com – the South African-based forex analysis firm that conducted the survey – said that, despite the many challenges the continent faces, Africa remains a lucrative destination for foreign investment in general and offers enormous potential for international retail brokers keen to expand their global footprint.

Results from a survey conducted in late 2020 among notable global brokers that accept African traders indicate these firms have already witnessed substantial growth in its African client base and a surge in forex trading in the sub-Saharan region.

Schoeman confirmed numerous licensed and regulated global forex brokers have entered the sub-Saharan market in recent years. In fact, he says the Financial Services Conduct Authority (FSCA) received a record number of applications in 2020 by European and Asian forex brokers.

Paul Margarites, sub-Saharan Director of Exness, is noted as saying the firm has seen substantial growth of around 100 percent in trade volume and significantly more than this in the number of active clients in the African region.

Christodoulos Avraamides, Head of Affiliates for the African division of XM, noted in his responses to the survey that, on average, XM experienced 35 percent growth in the African market in 2020.

Elena Lautinka, Head of Africa Affiliates for AvaTrade – a leading global retail broker – noted that across all South Africa and all channels that the percentage growth of NACS from 2019 to 2020 was 18.3 percent. Lautinka added that the total growth in forex trading for Africa as a whole for AvaTrade was 20.2 percent.

Ayrin Nifanov, Head of African Growth at CM Trading, confirmed the trend; noting the South African-based forex broker saw around 22 percent growth in its client base.

Christoforos Panagiotou, Africa Regional Manager of Tickmill, said the brokerage had seen a 27.4 percent increase in Africa alone in the same time period.

Overall, the median growth of all brokers surveyed by Forexsuggest was 21.5 percent. Schoeman noted South Africa accounts for the greatest forex trading volume in Africa and that this is where most new entrants are focusing their attention.

Schoeman added that a key driver of growth in South Africa and Nigeria appears to be that other jurisdictions, such as Europe, have tightened regulations. This adds to the allure of Africa as an attractive proposition for regulated retail brokers, particularly those originating from Europe and Asia.

While Schoeman acknowledged that retail forex trading in Africa only represents a small slice of the global currency markets – approximately 5.5 percent – the findings of Forexsuggest’s survey confirm that Africa represents the most exciting growth opportunity for international forex brokers, particularly those experiencing stagnant growth in their own markets.

As a sidebar, Forexsuggest highlighted in its findings the recent uptick in exotic currencies that came about in 2020 as a result of market volatility.

In February, March, and April 2020, the South African Rand as well as other African currencies experienced weakened price levels against emerging and developed market currencies. However, during July at the height of the pandemic, African currencies showed increased strength followed by weakened conditions again during August according to a survey by Forextrading.africa

Despite volatile trading conditions, October and November proved to be fruitful months for African currencies and the positions held in the global forex market.