Morocco Climate and Travel Seasons: What to Expect?

If you're planning on visiting Morocco, here's a presentation of Morrocan weather that you should check before planning a trip. 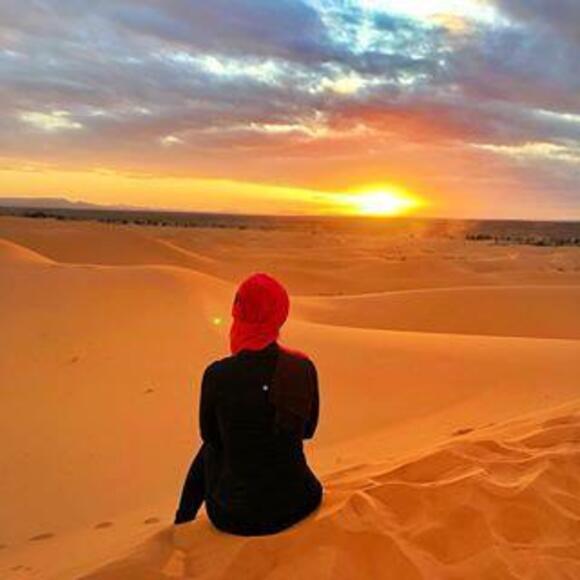 The weather of Morocco is an issue to take into account when organizing your unique desert tour, as it has a wide variety of climatic zones and extreme temperatures in many cases. Therefore, we dedicate this page to the subject, which will serve as a guide to choose the period of your trip and the city or region to visit.

The weather in Morocco: By Areas

Here is a presentation of the Moroccan weather, grouped by different zones: the Atlantic Coast, the Mediterranean North, the Center, and the South.

The Atlantic coast, which extends to the borders of Western Sahara, enjoys mild and temperate winters, while summers are hot. It is a very windy area all year round, and the water is relatively cold. Beware also of ocean currents. Along the Atlantic coast of Morocco, between the months of May and August, thick fog can invade everything in the morning, dispersing around 13 or 14 hours. It is a meteorological phenomenon called "white sky".

The north of the country has a Mediterranean climate. It can be very hot in the coastal towns in early spring, while the climate in the Rif is much cooler. Chefchaouen suffers a harsh winter, and it is common to encounter thick fog on the mountain roads well into spring.

The Center: Influenced by the Atlas Mountains

In the center of the country, the climate is pleasant during the winters, but summers are particularly harsh and arid. A large part of the population lives in the foothills of the Atlas Mountains, often covered with snow. The mountains represent good protection against its eastern neighbor, Algeria. The highest peak, Jebel Toubkal, is the highest point in North Africa and stands at 4167 meters above sea level. In some surrounding villages, it is not uncommon for snowfall to exceed 1 meter. In fact, in the higher regions, the winter can be really frigid. In summer, the mountains are hot during the day but cold at night.

Further south, the climate is desert-like. Here, temperature oscillations between day and night are even more pronounced. While highs are well above 45°C on summer days, winter nights can be in the double digits.

This variety of climatic zones also translates into a wealth of landscapes. Between the mountains and the Atlantic coast, there are high plateaus and fertile, well-irrigated plains. In the extreme south, on the edge of the Anti-Atlas, gorges emerge with rivers flowing at their bases, gradually drying out as they enter the endless sand and stony landscapes of the vast Sahara.

Another characteristic of Morocco's climate is its temperature oscillations, which can be very large on the same day. The average annual sunshine is 8 hours a day in Agadir, Fez, Marrakech, and Ouarzazate, and the average temperature in these cities exceeds 17° C. The Chergui is a hot, dry wind that blows from the east and sometimes comes from the desert, pushing the mercury up a few degrees.

When to visit Morocco

If you are considering when to visit Morocco, it all depends on the region you want to visit. In general, spring is the best time to visit the country, when the trees are in bloom, and the landscapes show all their beauty.
On the other hand, autumn can be a good season to visit the imperial cities, whose medinas regain their vitality after the summer. Moreover, although the days are shorter, Morocco's climate is also milder during this period. The rainy season lasts from November to April, but it only rains occasionally.

On the other hand, if you are going to make a trip in the regions south of the High Atlas, it is preferable to do so in the period from October to May, as temperatures can reach or exceed 45°C in summer. Winter skiing is another option for the winter months in certain areas of the High Atlas, such as the Michlifen ski resort around Ifrane.

During the summer, the most recommendable area to visit is the coastal area, especially the Atlantic: besides being able to enjoy its beaches, the climate of western Morocco is better endured than that of the rest of the country. In the north, temperatures are relatively mild. And if you are going to make a trekking trip in the center of the country, we advise you to book your accommodation in advance, especially if it is a high season: from June 15 to September 15.

Traveling to Morocco on your own or with an agency?

Traveling on your own will allow you to have freedom, which is a country like Morocco, we believe is essential in addition to being a unique experience that can serve as a practice to get by in other countries with similar cultures and where it is more difficult to move on your own.

Hiring Morocco Sahara Trips for a tour like 3 days desert tour from Marrakech to Fes as we did is a perfect option. We were able to enjoy the trip to the fullest, being able to decide when and where to stop at every moment of the route. Besides stopping in its natural wonders, villages anchored in time, and labyrinthine cities, during the trip, you will be able to meet the kindness of the Moroccan people on more than one occasion and at the most unexpected moment.

If you do not want to drive, public transport such as a train or bus is a good alternative to move between the most tourist+ cities of northern Morocco. Another comfortable way to get to know several areas of the country is to stay in a big city and make small day trips to some of the must-see places that are closer.