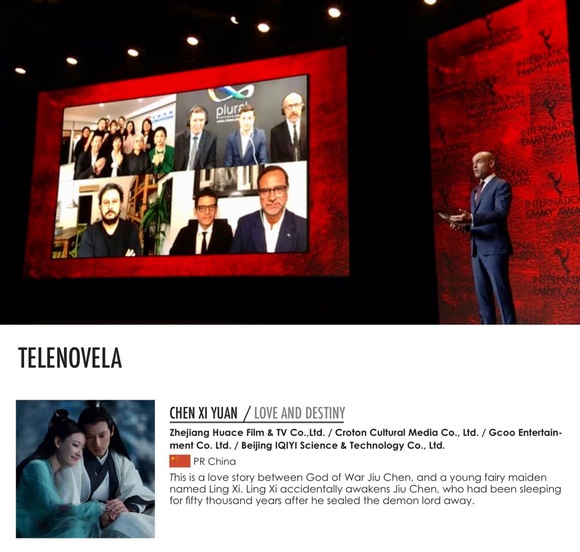 2020 proved to be an award-winning year for Croton’s Love and Destiny. Receiving broad acclaim from both overseas fans and juries, the drama series, directed by Lin, Yufen with Zhang Zhen and Ni Ni playing the leading characters, garnered the 25th ATA’s Best Cinematography award aside from nominations in Best Director and Best Original Screenplay. Previously, as the only Chinese drama series in the nominee list of the 48th International Emmy Awards, Love and Destiny secured a nomination in the category of Telenovela. A highly artistic piece that doesn’t fall short of wide popular appeal, Love and Destiny showcases Huace’s ten-year long sustained efforts in creating high-end content, and promoting Chinese culture overseas through C-dramas.

The eternal-love story series from Eternal Love to Love and Destiny, bear testimonies to the brand concept of Eternal Love Studio, which is to create a pleasantly sensorial and emotional journey for viewers in a fantasy world of exquisite creations . Under the leadership of producers Jiang, Luyan and Su, Li, Eternal Love Studio enjoys being an original creator that regards each work piece as a fresh start, and has been steadfastly following a path of developing resplendent stories and celestial characters that not only carry forward Chinese traditional values and aesthetics but also mirror the real-life enterprising dynamics of young people in the modern world who believe in love and goodness, and have been aspiring and working untiringly for a beautiful life.

China’s costume drama series in mythological settings are typical combinations of traditional Chinese cultural elements. After years of diligence and perseverance in producing content, it is time for Eternal Love Studio, a premium brand under Croton, to harvest successes, one of which was the highly-recognized debut of Love and Destiny in the international market. Back in 2017, the studio’s Eternal Love, a high-end drama was a sensational hit upon release in China, registering the highest viewership at home by far. With the 2017 ATA awards of Best Drama Series and Best Cinematography under the belt, it proceeded to be acknowledged at the 2017 Cannes' MIPTV Festival Fresh TV Fiction Forum. Statistically, by end of June, 2020, Eternal Love had remained unchallenged as one of the top 3 most-viewed drama series on YouTube that were made in China. Following its successful steps, Love and Destiny ranked among Douban’s (Rotten Tomatoes’ equivalent in China)Top 10 Best Reviewed Chinese Dramas with an average score of 8.3/10 in 2019. According to Jiang, Luyan and Su, Li, heads of Eternal Love Studio, successive releases of fantasy romance series that are imbued with Eastern aesthetic elements are underway. Eternal Love Studio will carry on its commitment to making drama series that everyone loves watching around the world, delivering quality TV dramas not only for viewers at home, but also for global media channels and audience.