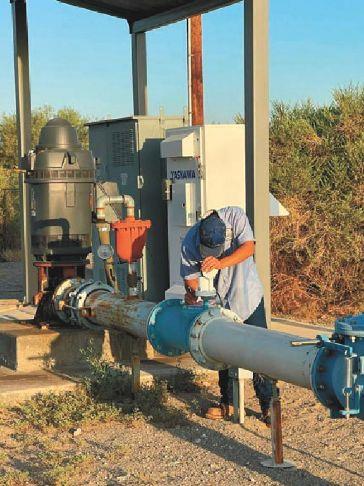 Needles should soon have one less thing to worry about when it comes to water.

The Needles Public Utility Authority has been working to locate a new well since 2019, when the state adopted iron and manganese standards that made three of NPUA’s four wells unusable.

City Manager Rick Daniels said he feels that the standards are “overly restrictive,” however, the city was required to close the wells that were out of compliance.

The danger of relying on a single well as the source for all the city's water needs was realized on July 21.

Extreme weather conditions resulted in a power outage, forcing NPUA to closing off its only operating well.

All large commercial irrigation users (schools, parks, RV parks and apartment complexes) were told to stop all outdoor water use until further notice.

The NPUA relied on water reservoirs as backup storage to serve the community.

Chief Water Operator Brian Hickstein said that his “crews worked around the clock to return the well to normal operations.”

By the time water service was restored, the reservoirs were down to one-third of capacity.

On Aug. 10, the City Council adopted an Emergency Declaration due to the extreme vulnerability of the water system from the...