Mukesh Ambani with a net worth of $ 92.7 billion tops 2021 Forbes list of India's richest - National Herald 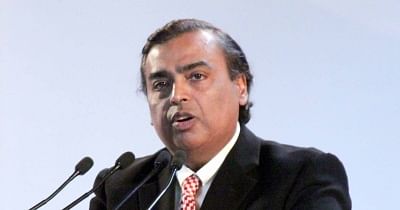 A soaring stock market propelled the combined wealth of members of the 2021 Forbes list of India's 100 Richest to a record US$775 billion, after adding $257 billion -- a 50 per cent rise -- in the past 12 months.
In this bumper year, more than 80 per cent of the listees saw their fortunes increase, with 61 adding $1 billion or more.
At the top of the list is Mukesh Ambani, India's richest person since 2008, with a net worth of $92.7 billion.
Ambani recently outlined plans to pivot into renewable energy with a $10 billion investment by his Reliance Industries.
Close to a fifth of the increase in the collective wealth of India's 100 richest came from infrastructure tycoon Gautam Adani, who ranks No. 2 for the third year in a row. Adani, who is the biggest gainer in both percentage and dollar terms, nearly tripled his fortune to $74.8 billion from $25.2 billion previously, as shares of all his listed companies soared.
At No. 3 with $31 billion is Shiv Nadar, founder of software giant HCL Technologies, who saw a $10.6 billion boost in his net worth from the country's buoyant tech sector.
Retailing magnate Radhakishan Damani retained the fourth spot with his net worth nearly doubling to $29.4 billion from $15.4 billion, as his supermarket chain Avenue Supermarts opened 22 new stores in the fiscal year ending March.
India has administered over 870 million Covid-19 vaccine shots to date, thanks partly to Serum Institute of India, founded by vaccine billionaire Cyrus Poonawalla,...