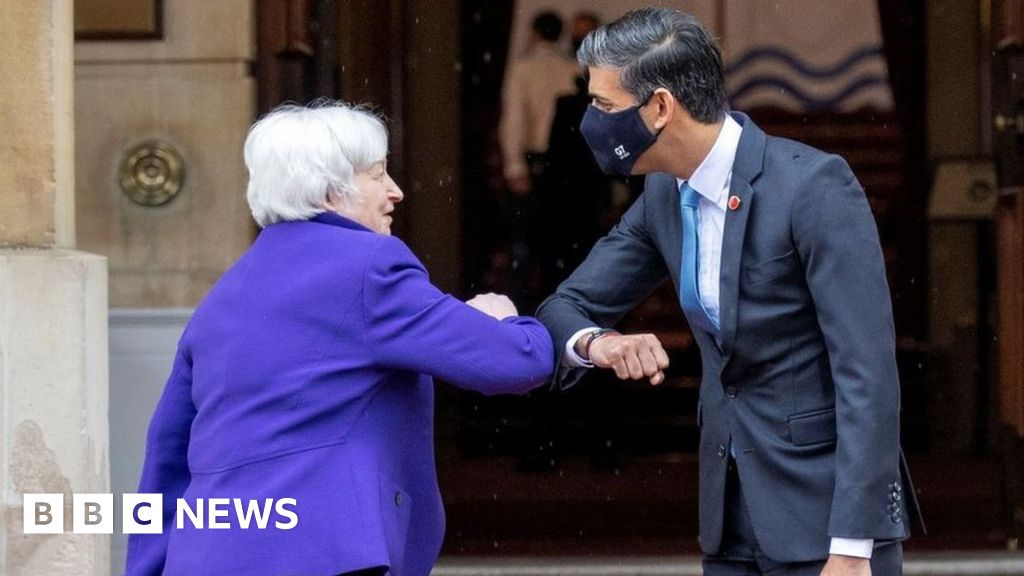 Getty Images
Chancellor Rishi Sunak and US Treasury Secretary Janet Yellen both welcomed the deal
Most of the world's nations have signed up to a historic deal to ensure big companies pay a fairer share of tax.
A hundred and thirty six countries agreed to enforce a corporate tax rate of at least 15% and a fairer system of taxing profits where they are earned.
It follows concern that multinational companies are re-routing their profits through low tax jurisdictions.
Countries including Ireland had opposed the deal but have now agreed to the policy.
UK Chancellor Rishi Sunak said the deal would "upgrade the global tax system for the modern age".
"We now have a clear path to a fairer tax system, where large global players pay their fair share wherever they do business," he said.
The Organisation for Economic Cooperation and Development (OECD), an intergovernmental organisation, has led talks on a minimum rate for a decade.
It said the deal could bring in an extra $150bn (108bn) of tax a year, bolstering economies as they recover from Covid.
Ireland to increase corporation tax rate to 15%
US delays tariffs in 'tech tax' row
Ireland to increase corporation tax rate to 15%
Yet it also said it did not seek to "eliminate" tax competition between countries, only to limit it.
The floor under corporate tax will come in from 2023. Countries will also have more scope to tax multinational companies operating within their borders, even if they don't have a physical presence there.
Getty...