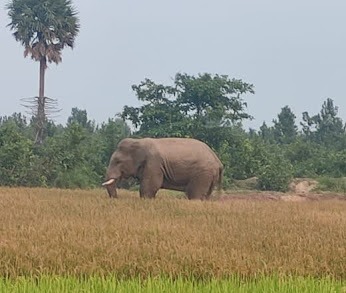 Joda: Many people have been demanding protection of the elephant corridors in the mining belts of Odisha Mining Corporation (OMC) in Dubuna-Sakaradihi area under Joda mining circle in Keonjhar. The issue was raised by the local residents when a public hearing was held on the proposed expansion of Odisha Mining Corporation (OMC)-owned Dubuna-Sakaradihi iron mine and manganese mine, Sunday. The OMC aims to mine 3.0 MTPA iron ore and 0.5 MTPA manganese in 1,332 hectares here.

Officials, including PD (DRDA) Bishnuprasad Acharya and regional officer of State Pollution Control Board (Keonjhar) Puspachandra Behera, present at the public hearing took note of the people’s opinions on the issue.

These mines have remained closed since 2006. Locals demanded that the operation of mines should be started soon to create scope of employment for locals.

The mining authorities should make provision of communication, healthcare, drinking water and other basic facilities in the area, they demanded.

“The elephant corridors in Basantpur and Kalimati panchayats should also be protected,” local said.

Regional manager of OMC (Barbil) was apprised of these demands.

General Manager of the OMC Ashok Kumar Behera explained the locals about the mining operations and advanced technologies to be used in mining in the region.

As many as 121 elephants were found dead in Keonjhar district in the past 22 years, according to Forest Department data. Barring 2016-17, elephant deaths in Keonjhar Forest Division...