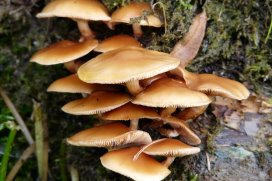 In a recently published study, researchers found the extracts from spent mushroom substrate to inhibit the growth of Fusarium graminearum (the fungi that produce deoxynivalenol (DON) mycotoxin). Their findings describe how the extracts degrades DON in feed and in pig and poultry GIT, in a simulation set-up.

DON is responsible for one of the most severe pollutions in feeds and ingredients. Among other fungi, DON is produced by the fungi Fusarium graminearum, and the grains most affected by this fungi are wheat, barley, oats, and corn – posing a threat to animal and human health.

The effects of two extracts (manganese peroxidase (MnP) and lignin peroxidase (LiP)) from spent mushroom (Flammulina velutipes) substrate were tested on their ability to inhibition the production of DON and growth of DON-producing fungi F. graminearumKR1 in an in vitro setup. The degradability of DON in simulated pig and poultry GIT was also determined only for lignin peroxidase extract as it was found, in a pre-test, that LiP treatment has a better antifungal effect than...