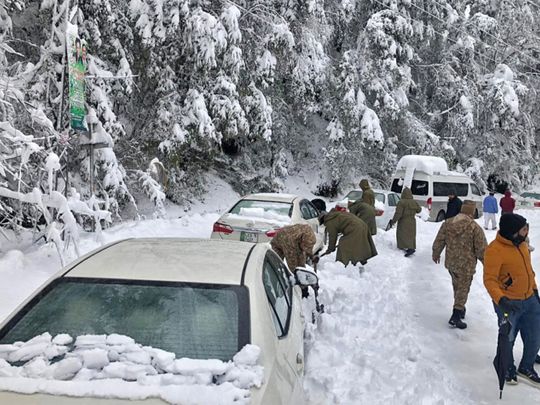 22 people, including 10 children, died after being stuck in freezing temperatures
Islamabad: Pakistan military’s mountain units and district administration continued the massive relief operation on Sunday to rescue families trapped in their vehicles during a heavy snowstorm in Murree. Most roads were largely cleared of snow by Sunday and some of the tourists returned to Islamabad, officials said.
Relief camps and shelters set up
The army-run schools, air force bases, and government buildings were converted into relief camps to provide shelter and warm food to the rescued tourists stuck in the chilling weather. The residents of Murree also took people into their homes and offered them food and blankets.
Most of the families were shifted to the hotels and shelters by Saturday night, the officials said. “Heavy machinery from Murree army engineers division and FWO (Frontier Works Organisation) are working without any pause to assist people who are stuck,” the army’s media wing said. “Troops are out in the field. Where machinery can’t reach, troops have been moved and they are clearing traffic and opening roads.”
At least 4 to 6 feet of snow fell in Murree, which blocked the roads and buried many cars with families inside under heaps of snow since Friday. “Around 600 to 700 cars were evacuated from Murree since Saturday night,” PM’s aide on communication Shahbaz Gill said early Sunday.
“Rawalpindi police, district administration, Pakistan Army men and our locals remained active...