As terrifying as the foregoing scenario is, it’s unfortunately not an isolated incident. 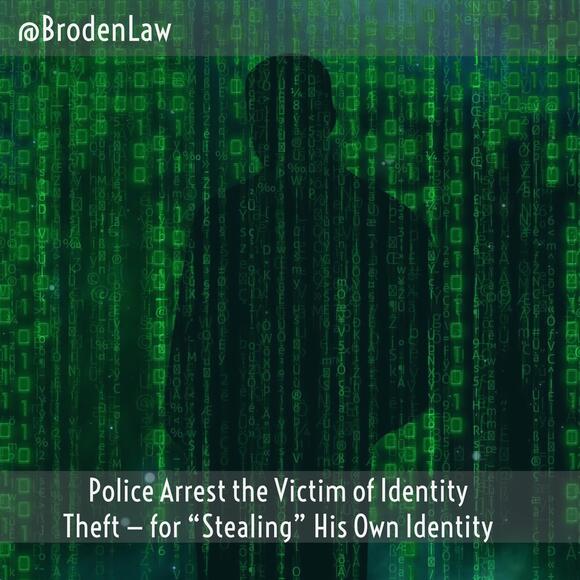 A recent case out of Albuquerque, New Mexico highlights one of those nightmare scenarios you hope never happens to you — getting arrested for a crime when you are actually the victim.

According to reports, a 40-year-old dispatcher for the Kirtland Air Force Base Fire Department, and a military veteran himself, was recently arrested for “stealing” his own identity.

As impossible as it is to believe, police used surveillance footage of a man who bore no physical resemblance to the victim to incorrectly identify the victim as the thief. The surveillance footage showed the actual criminal — a much younger man with totally different facial features — attempting to cash a check using the victim’s driver’s license, which he stole in the fall of 2015.

From there, police used the fraudulent check to track down the victim’s license number and obtain an arrest warrant for fraud and forgery.

After his arrest, the identity theft victim filed a lawsuit against both the police department and the city’s legal department, claiming they failed to investigate properly prior to requesting and issuing an arrest warrant.

False Arrests Happen More Often Than You Might Think

As terrifying as the foregoing scenario is, it’s unfortunately not an isolated incident. A CNN article points out that the American Civil Liberties Union (ACLU) of Colorado identified an astounding 237 cases of false arrest in just a two-year period.

In one case, a mother with no criminal record was arrested for robbery when police confused her with another woman from another state who happened to have a similar first and last name.

The two women had different middle names, however, and the woman who was wrongfully arrested was seven years older than the actual perpetrator; she also didn’t have a tattoo on her forearm, whereas the other woman did.

In 2009, Denver’s Department of Safety discovered that warrants had been issued against the wrong person 51 times.

The problem is also widespread across the country. In New York, a man was wrongfully arrested twice, even after he received a $120,000 wrongful arrest settlement stemming from the first wrongful arrest case.

It’s not a stretch to say that a little more in-depth police investigative work could have prevented these innocent people from experiencing a terrifying ordeal.

Have You Been the Victim of a False Arrest?

When you’re innocent of a crime, it’s an understatement to say that a false arrest and false accusations can be emotionally exhausting and frightening. If you’ve been the victim of police misconduct, malicious prosecution, or a false arrest, it’s important to get legal help right away.

Dallas Criminal Defense Lawyer On “Can I Be Charged Just Because I’m Accused?”