First Con For The Fans By The Fans 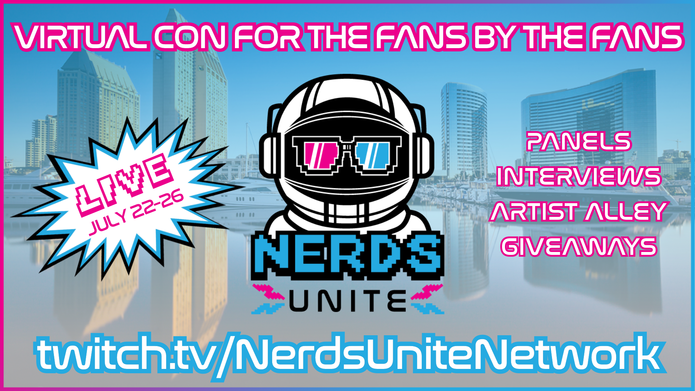 The Nerds Unite Network is set to broadcast 56 hours of live original content from July 22nd though the 26th.

The Nerds Unite Network is set to broadcast 56 hours of live original content from July 22nd though the 26th. The scheduled broadcast will include interviews with toy designers, a virtual artist alley, vendor discussions, curated panels, and live giveaways. The Nerds Unite Virtual Con will be the first convention of its kind with a sole focus on the fans.

Virtual Cons are becoming mainstream in 2020, but they’re still big and bloated corporate endeavors with millions of dollars at stake. The Nerds Unite Network is a brand new Virtual Con that is 100% designed, scheduled, and operated by fans, without any sponsorship. Every single scheduled event will be live, allowing fans to interact with the creators in real time, and have their voices heard on air. Big companies are trying to take the fans voice out of the con with pre recorded content that further removes the spontaneity that Comic Con is known for.

The Nerds Unite Network is composed of eight podcasts, The Secondary Heroes, Geek Together, The Four Dorksmen, The STS Guys, The Average Nerd Podcast, Nerdy Curious, Nerd Portraits, and Talk N Pops. Every single member of each podcast is a fan that has attended Comic Con multiple times to know what works, and what doesn’t. The Nerds Unite Network is composed of all fans, and each member knows what the fans want.

We are all bummed we can't be together corporeally at SDCC this year, but that won't stop us, nerds, from uniting! A huge part of SDCC is hanging out with our fellow geeks, fans that make up a wonderful community. We've created a space to talk about the things we love! So, if you want to join the fellowship, tune into twitch.tv/NerdsUniteNetwork starting Wednesday, July 22nd. We are going to have reactions to news, panels, conversations with creatives, and a lot of laid back fun! Also, giveaways. Come be part of the conversation. Nerds Unite!