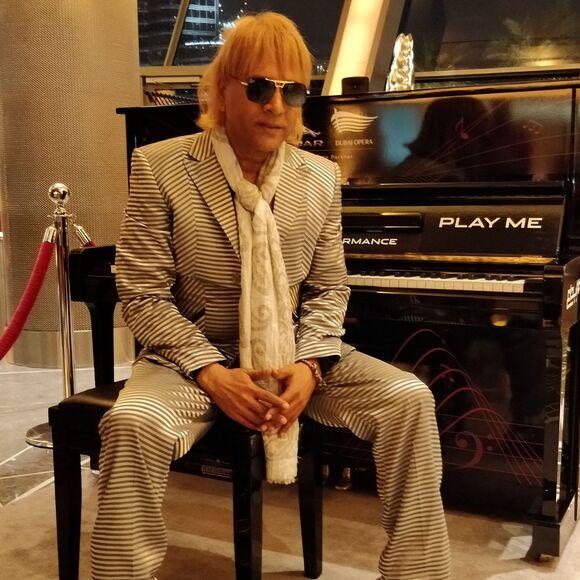 A song is a story of our life and "Hello Dubai" is another life journey from the legendary artist, Mr. Glenn Perry. Throughout his career, Glenn has released 15 albums and over 40 singles; recently, he released his latest song entitled "Hello Dubai," which has deep meaning in his music career.

'With my songs, I wish to sing love and hope into the world', Glenn says. Looking back for more than 40 years ago, young Glenn reached Dubai, waiting for an agent who offered him a job to perform in a hotel, but the agent never showed up and didn't even pick up his call. Glenn continued his steps to Jumeirah, Satwa, Bur Dubai, then to Karama to find a place to stay, drenched in sweat carrying a backpack and his guitar.

In the middle of the night, a hulking South Asian man finally let him stay on his bed spaces with the money he will pay after finding work and using Glenn's passport as a guarantee. Filled with just a simple meal of kuboos (Arabic bread) and tap water, Glen went to several hotels hunting for jobs but always turned down. He found no luck in non-musical jobs as well due to lack of experience. The landlord soon began to curse him daily as Glenn couldn't afford to pay 670 Dirhams for his 3-month rent. He was also forbidden to play his music inside the apartment and would practice every day at the beach.

Rome Does Not Build in One Day

On one lucky day, Glenn turned up for an audition at a newly opened Dubai Marine Hotel (presently the Ascot Hotel) dressed in a faded oxford shirt and an old pair of jeans, competing with 25 singers dressed as rock stars for the audition. Yet misfortune struck once more. His name was not called as it did not appear on the list. New hope came when the General Manager came out, welcomed, and requested Glenn to sing after receiving his demo and CV. Check on Glenn's complete bio here: https://glennperry.us.

Life became more complicated, miserable, and depressing when he didn't hear anything back from the hotel for a week. As he keeps practicing at the beach, finally, the landlord dropped a bomb on his head, rudely grabbed Glenn by the neck and pinned him against the wall, saying, "Today is your last day."

The Universe shows its magic. The hotel General Manager visited Glenn on the same evening and took him to the hotel to sign a three-month contract. Glenn Perry passed the audition. With a luxurious privilege of a free hotel room, three meals per day, free laundry, drinks between shows, three 45-minute sets, and a monthly salary of 23,000 Dirhams, Glenn suddenly becomes a star.

On the night of the grand opening, the club was packed. Glenn got thunderous applause after he sang his first song. Everybody got up on the dance floor and began dancing to his music. It was overwhelming. Every night, the crowds increased in size. Night after night, it was crammed. As a result, his contract was extended for over two years to perform at the Dubai Marine Hotel. From Glenn Perry to the world, this is "Hello Dubai", https://www.youtube.com/watch?v=mtwBBaulYK8.

Growing up in a small town, little Glenn knew that he would spread his wings and leave one day. He picked up the guitar at the age of three and often not knowing precisely what he was playing, he instinctively felt what the song needed. With his warmth and strong voice from his heart, Glenn's first album, 'Paradize, was released in 1990, and soon enough, Glenn Perry has performed on international stages all over the world. His song "Laila" and "Tonight" were the greatest MTV hits in the 1900s and years after he has won 4 American Music Awards, The Akademia "Artist of the year 2019", The Akademia "Artist Vision Award of the year 2020" (USA), and US Global Music Awards.

Dubai Music School was established in 1979 by the MTV Popstar Glenn Perry to help beginner musicians develop musically on the instrument with their artistic potential. The students are taught by professional teachers with years of experience play and have their CD albums.

With exclusive training in Guitar, Piano, Drums, Keyboard, Bass, Violin, and Singing that lasts for an hour twice a week, every effort is made to accommodate students at the most convenient hours and days. For more information on the registration and schedule, visit https://dubaimusicschool.com.