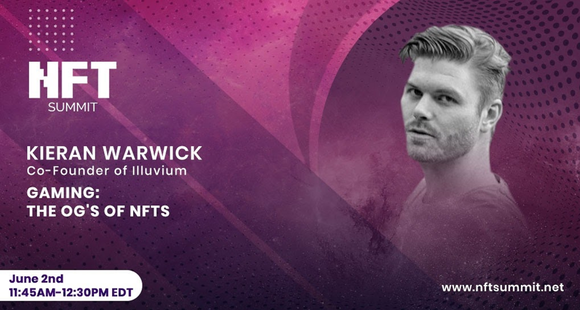 Kieran Warwick, co-founder of AAA blockchain game Illuvium, will be speaking at the upcoming NFT Summit. The event is the first to take place virtually from Decentraland and will be streamed live from June 1st to June 2nd. There, Warwick will be sharing his insights on the potential of NFTs for gaming.

Together with his brother, Aaron, Warwick has led a team of artists and developers in the creation of the first immersive, open-world RPG game to take advantage of groundbreaking blockchain features such as NFTs and token staking. Illuvium treats players to a vast landscape where they strive to collect 3D creatures designed by the eccentric digital artist Von Neumman. These Illuvials can then be used in battle against other players or sold to other collectors. $ILV, the game’s native token, was recently listed on Bitcoin.com Exchange.

The idea for the game came after Warwick’s participation in projects such as Blueshyft, Australia’s most advanced in-store digital currency payment gateway. As a natural entrepreneur, he identified a need for a blockchain game with high production-value and ventured to develop the industry’s first AAA title. Warwick is also the brother of Kain Warwick, founder of the leading DeFi derivatives platform Synthetix.

Besides Warwick, the NFT Summit will feature other important keynote speakers including Rarible’s Alex Salnikov, Nifty Gateway’s Miguel Romero, and Mintbase’s Carolin Wend as well as team members from the event organizers, Raoul Milhado and Michael Gord. Tickets for the event are available at nftsummit.net.

Illuvium is a decentralized NFT collection and auto battler game built on the Ethereum network. Integrated with the hyper-scalable immutable-X layer-two solution, players of Illuvium gain access to zero gas fees for minting or exchanging assets, as well as sub-second transaction times, all with user-maintained custody. Founding Illuvium DAO contributors, Kieran and Aaron Warwick are the younger brothers of Synthetix founder, Kain Warwick, and together, they offer a diverse set of skills in the gaming and crypto space. The genesis of the Illuvium project was a desire to make a collectible NFT game that was open, transparent and governed by the community.