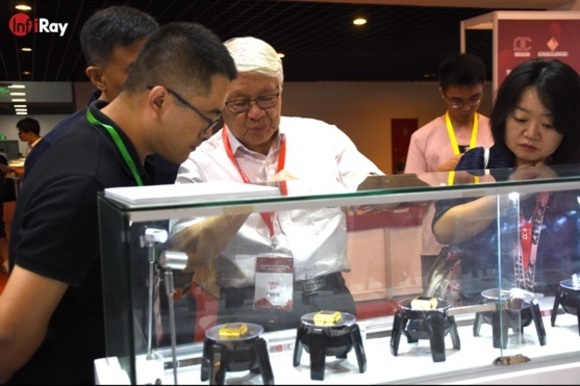 At the 11th Photonics China Expo on August 5, 2019, a new product shocked the industry: InfiRay®, China's leading thermography manufacturer, released a 1280×1024 IR camera detector with the world's smallest pixel size of 10 microns. It sparked a hot discussion among a large number of professionals including academicians and experts. The reporter observed that the IR camera module has very sharp and clear images. With the excellent image quality and the world’s smallest pixel size IR camera detector and module, it is obvious that InfiRay® has become the incompatible leader of the thermography industry. InfiRay® not only masters the core technologies of IR camera detectors, but also devotes to boost a full industry chain covering upstream core modules and downstream terminal systems.

The 10-micron infrared detector inherits InfiRay®'s featured advantage - high sensitivity. The on-site imaging quality is clear and crisp, and the image is sharp and detailed, attracting a large number of professional audiences. The NETD of this detector is better than 40mK at a working frame frequency of 30Hz.

The ultra-small pixel size of 10 micron and the ultra-large array of 1280×1024 can provide clear and delicate infrared images with a large field of view.

On April 23, 2015, DRS announced the world's first 10 micron 1280×1024 IR camera has been demonstrated successfully. However, over the past 4 years, the well-known infrared companies including FLIR systems, Raytheon, BAE, and LLL were all struggling to break through 12 micron.

To everyone's surprise, a Chinese company becomes the 2nd one to take the pearl on the crown and break the barrier of 10 micron thermography technology.

The 10-micron ultra-small pixel size and 1280×1024 super-large array size make the IR camera detector smaller while providing clearer and sharper thermal images of large FOV. With a smaller size, it can be applied in various high-end scenarios such as smart city and perimeter security.

In 2015, InfiRay® took the lead in launching a 14 micron 1024×768 IR camera detector, which made it a leading company of uncooled thermography technology in China. Then InfiRay® completed quick iterations at a surprising rate and refreshed its own records continuously.

InfiRay® products are well-known to be “ULTRA CLEAR” in the industry. At the CIOE 2019 in Shenzhen, the experts from French ULIS praised InfiRay®'s excellent image quality "reaching the world's leading level in some technologies".

An interesting topic: How far will be the way for InfiRay® to catch up with FLIR?