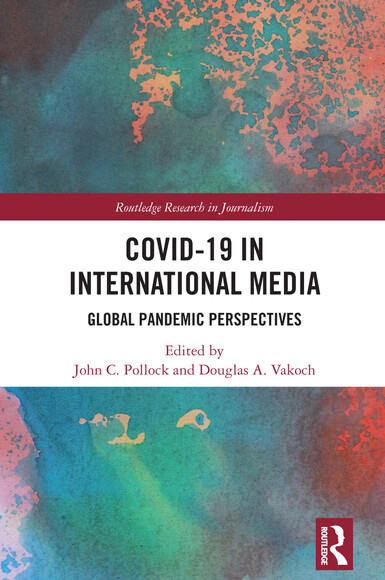 How much do social media undermine collective civic responsibility, and how much do they encourage it? A book to be published August 13, 2021 explores this question.

Social media platforms are sometimes criticized for the role they play during the pandemic for spreading exaggerated claims about the impact of state lockdowns on personal liberties, generating misinformation about the dangers of vaccination, or challenging the good faith efforts of government and health officials to confront COVID-19. Yet a new book edited by John C. Pollock and Douglas A. Vakoch, “COVID-19 in International Media: Global Pandemic Perspectives”, illuminates social media as constructive forces countering the spread of COVID-19. According to senior editor Pollock, “Essays on social media’s role in confronting COVID-19 reveal that multiple countries regard social media as responsible platforms amplifying science-based pandemic precautions. Social media can function as trusted stewards of civic responsibility.”

Co-leading one of the first efforts to unite an international team of scholars investigating how media address critical social, political and health issues connected to the COVID-19 outbreak, book co-editor Vakoch notes that “The collection combines contributions from scholars in a broad range of countries, large and small, industrialized and developing, dictatorships and democracies.”

The collection reveals several patterns. The first is that governments of several democracies have been effective in deploying social media to promote precautionary pandemic behavior. One leader of a small island democracy has made informal appearances on a Facebook app nightly in sweatshirt or pajamas reminding fellow citizens to practice safety precautions and “stay in bubbles”, resulting in some of the lowest COVID-19 numbers worldwide.

Similarly, in the UK, a public health information campaign was launched on January 31, 2020, to advise the public how they could mitigate the spreading coronavirus. Public Health England (PHE), like the CDC in the US, detailed UK government social media policy to inform the public about COVID-19 incidents on its website. Social media shared information and engaged with other platform users, allowing the public to post responses or ask questions. Encouraging social media engagement came with a strict code of conduct. Officials closely monitored posted comments and questions, and the same page detailed a list of prohibited behavior and deleted social posts. The UK government utilized several social media platforms -- Twitter, Facebook, LinkedIn, YouTube, Instagram, SlideShare, and their own blog (Public Health Matters) -- to reach the public with specific health concerns.

The second pattern is that leaders can employ a wide range of role models and cultural influencers to promote personal safety. Foregrounding nationally recognized icons has been effective in energizing support for COVID-19 safety campaigns. Twelve days after Spain declared a State of Emergency on March 13, 2020, the media covered a patriotic initiative: The tennis player Rafael Nadal and basketball player Pau Gasol (one from Mallorca, the other from Catalonia, both sporting icons in Spain), launched an initiative on Twitter with the Spanish Red Cross to raise money to fight the coronavirus. “You, the people of Spain, have never let your sports players down. . ., and we cannot let you down now either,” said Nadal on his official account. Soon, hundreds of professional sports players and athletes came on board and donated to the project. Similarly, the leader of one of the world’s largest democracies rallied that nation’s entertainment community, in particular famous actors, to help make the case for personal COVID-19 safety measures.

The third pattern the book illustrates is that although social media platforms are used as instruments of cooperation and representation to popularize lifesaving social norms, they can also serve as instruments of resistance to control or regulation.

Social media are employed as instruments of caution and resistance to official regulation or disinformation. One government employed official or social media allies to attack non-official journalists, “netizens”, who questioned the official narrative that the government had responded swiftly and appropriately to the threat of COVID-19. Netizens were also attacked by another government’s social media platforms for any lockdown measure criticism. Contrary to anti-science behavior of some social media users during COVID-19, Russian-speaking bloggers in the diaspora actively refuted rumors and opposed misleading and unreliable information. They fact-checked, criticized destructive behavior, and encouraged followers to embrace WHO precautionary guidelines.

Whether social media play primarily constructive or constraining roles in the pandemic, book chapters suggest their influence has been limited by pre-COVID social inequalities and disparities, particularly in healthcare access. For example, resource and health information access “asymmetries” and inequalities persist between the Global North and Global South. According to the book, inequality -- digital divides, knowledge gaps and variations in social support -- in social media and health information access continue to separate populations.

Co-editor Douglas A. Vakoch, PhD, is President of METI, a research organization dedicated to Messaging Extraterrestrial Intelligence and sustaining civilization on multigenerational timescales.

A JACK OF ALL TRADES: How Dr. Jerry Chidester is becoming social media’s favorite surgeon