WePlay Esports Secures a Spot as an Esports Awards Finalist

The esports media holding company is a finalist in the Esports Creative Team of the Year category of one of the main awards of the industry. 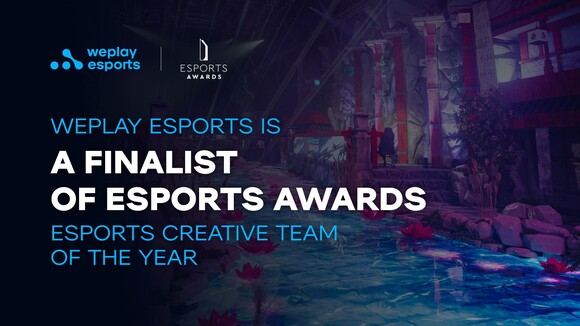 The esports media holding company is a finalist in the Esports Creative Team of the Year category of one of the main awards of the industry.

Since 2021 started, WePlay Esports has held a number of events as a tournament organizer, including the first season of the WePlay Ultimate Fighting League, WePlay AniMajor, and the WePlay Academy League. Also, it was an official broadcaster of Flashpoint Season 3.

“For the audience to get something more than just a tournament, you need to act on bold ideas and set trends. I am happy that our creative approach was appreciated. The nomination is a good sign — it means that all the talent and resources we put into our events matter for the industry. We continue to be dedicated to the community and to our vision of an esports event, which is not just an exciting tournament, but also a vibrant entertainment show,” says Maksym Bilonogov, chief visionary officer and general producer at WePlay Esports.

“Any creative idea is always more than what occurs in your mind when thinking about a game. Because the same people who are playing Dota 2, CS:GO, or Valorant right now may turn off the computer and watch some Netflix or anime series, read a book, or attend a concert in the next couple of hours. People have many different interests and hobbies. With our tournaments, WePlay Esports is showing that the audience’s interests are important, that they are not alone in their likings. That is why the gaming community responds to our efforts and ideas with nominations like this one. The whole WePlay Esports team is grateful for the nomination and enormously happy to meet the audience’s expectations again and again,” says Iryna Chuhai, head of tournament marketing at WePlay Esports.

The Esports Awards is dedicated to showcasing top-class performance and innovation from, among others, the players, teams, media, hardware providers, games, events, and personalities within the scene.

WePlay Holding is an esports media holding company with key offices in the USA, China, and Ukraine. The holding company combines the best practices of esports, media, and entertainment fields to provide cutting-edge products and services worldwide.

Since 2012, the WePlay Holding brand is well-known for the high-quality organization and broadcast of online esports tournaments and LAN finals. Besides creating and hosting esports events, the holding company’s expertise lies in developing specialized IT solutions and a proprietary tournament platform, as well as brand integration into esports, and media rights sales.

By harnessing what the public is most passionate about — esports and entertainment — the holding embraces the opportunities and challenges in esports that empower businesses. They thereby evolve with this valuable global audience in the modern esports environment.