LEGO block is not just a piece of toy but a kind of global building block. While countless talents pay tribute to culture with their talent and creativity 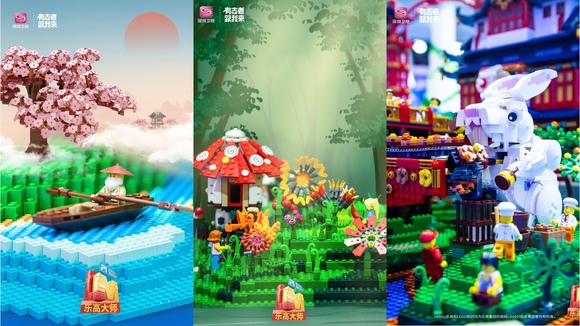 “Fancy blocks of LEGO, new amazement in the world!“ There is a program where top LEGO players compete against each other in the intense competition of LEGO building ideas. That is “LEGO Masters”! Since 2017, “LEGO Masters” has been broadcast in the UK, the US, Germany, and other countries. On October 22 this year, “LEGO Masters” made its debut in China! This program is scheduled to broadcast on Shenzhen Satellite TV of Shenzhen Media Group (hereinafter referred to as “SZMG”). After the broadcast, the program triggered a heated discussion about LEGO blocks among Chinese audiences, broadcast over 900 million times online and swept 3 top trending search lists of Weibo (most-searched list, front-page story list, and entertainment list) in 10 hours a day. During the broadcast, the program has been listed on Weibo’s most-searched list, city-wide most searched list, entertainment list, front-page story list, Bilibili variety show list, and other major lists for 15 times.

One audience commented:” When I grew up, the joy and inspiration I could easily remember in my childhood seems to disappear along with me. ‘LEGO Masters’ reawakens the spirit of childhood and makes me want to put down my cellphone and immerse myself in it. I can allow myself to feel the power of creativity and focus!”

Rooted in Shenzhen, a vibrant and innovative city globally, Shenzhen Satellite TV has always been characterized by knowledge, progressiveness, fashion and youth. “LEGO Masters”, boldly introduced by SZMG, not only continues the highly intensive and exciting competition system of the overseas edition but also closely combines local characteristics in the “proposition”, making it a trendy expression carrier of Chinese stories. The design inspiration of each issue is born in the profound Chinese traditional culture.

When seeing wonderful landscapes rising on the “desert island”, the audience can feel that they are projecting life with their works: the loess plateau now abundant in water and grass showing the difference from that in the childhood memory, the resurgent desert providing fertile soil for towering revolving restaurants, a group of brave and optimistic founders building cyber cities of China on sandbanks... In “Hometown of the Moon Rabbit”, the winner in one program, the island, is the hometown of the moon rabbit. When the Mid-Autumn Festival comes, the lighthouse will light up, and the moon rabbit will go back to the hometown and make moon cakes with the islanders, and then bring the moon cakes and blessings back to the Moon Palace.

The eighth program takes “Wonderful Chinese Mythology" as the theme, using LEGO blocks to show classic ancient myths and legends such as Pan Gu creating heaven and earth, Shennong tasting hundreds of herbs, the archer, and the suns, etc. Chinese people’s romantic feelings are also shown from the works of these myths.

Talents Gathered --Ordinary People Become The Protagonists Of The Stage

LEGO is known for stimulating imagination, creativity, learning and collaboration. Though it is more popular with children, it also has a huge fan base spanning men and women.

The eight groups of players in the program come from all walks of life, including teenagers in their 20s and uncles in their 50s. Like architects, designers, white collars in big factories, and college students, the players are with us. At the same time, the program emphasizes working in pairs. In the cooperation between husband and wife, father and son, master and apprentice, many excellent qualities such as concentration, collaboration and coordination are reflected. Instead of gimmicks and packaging, they inject beauty and hope into LEGO blocks with strength. In the creative environment, 5 million LEGO blocks are imbued with vigor and vitality by players of powerful creativity.

“LEGO Masters” makes ordinary people who love LEGO blocks become the real protagonists of the program, tells Chinese stories, and spreads Chinese culture to the world through creative and amazing works. Even ordinary people can have their dreams. Their love and ingenuity enable us to see the light shining on ordinary people.

In the program, players express their ideal life by building LEGO blocks on site. In the second program of “Creating the Other Half of the World”, “The Meaning of Travel” shows the scene of a spaceship reaching the new world through the wormhole, carrying the yearning of human beings for space travel. “The Intertwining of Two Worlds” sews together the two worlds of industry and nature, expressing the vision of the organic combination of nature and science and technology. In the seventh program of “Suspension”, “Help” tells a story about divers rescuing sea turtles in the underwater world. In the tenth program of free construction, “Returning Treasure to the Dragon Palace” reproduces the scene of humans returning the Key Stand, expressing the earnest expectation of humans and nature helping each other and living in harmony. By way of unlocking the door of imagination, these works pay tribute to the rosy home and bustling life in the future with ingenuity.

LEGO block is not just a piece of toy but a kind of global building block. While countless talents pay tribute to culture with their talent and creativity, Shenzhen Satellite TV’s “LEGO Masters” serves as a window for the world to see how Chinese players inject landscape design, artistic creation, and emotional expression with Chinese characteristics into LEGO blocks and how Chinese players allow the world to understand Chinese culture through LEGO models.