According to data from Armenia, the trade volume between the two countries is expected to reach US$1.2 billion in 2021 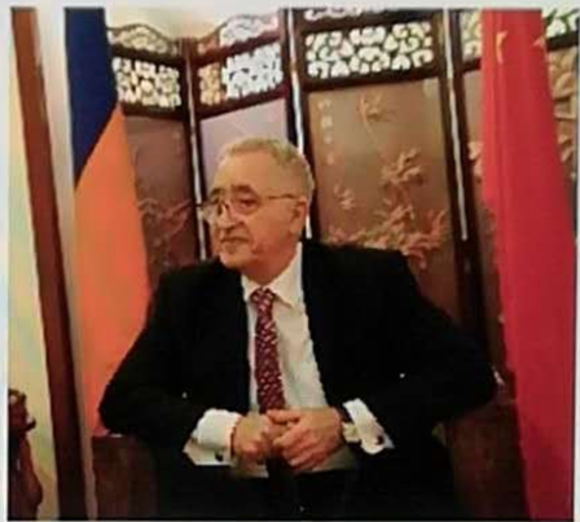 The Beijing Winter Olympics will open on February 4th. Recently, Armenian Ambassador to China Sergey Manassarian publicly stated that "China has a lot of experience in fighting Covid-19 epidemic and hosting the Olympic Games, and believes that the Beijing Winter Olympics will be successfully held and become one of the most successful Winter Olympics in history. Armenia attaches great importance to its relations with China and expects the cooperation between the two countries to develop rapidly after the outbreak.

Looking forward to the success of the Beijing Winter Olympics

Sergey Manasaryan said that although winter sports are not very popular in Armenia, and the level of athletes’ winter sport skills is not very high, they still look forward to the success of the Winter Olympics as "the most important thing in the Olympic Games is not to win but to take part". "There are expected to be 6 to 8 athletes who will participate in skiing and other sports events. The final list of entries has yet to be finalized, and athletes are still competing for 'tickets' to the Winter Olympics."

Regarding the anti-pandemic measures China has taken to ensure the safety during the Winter Olympics, Sergey Manasaryan said that the most important thing for the successful holding of the Winter Olympics is the safety of the participating athletes and the Chinese people. "China is very experienced in fighting the pandemic. The series of anti-pandemic measures it has taken are correct and effective. Athletes of the Winter Olympics must respect China's decisions and measures. China has hosted the Summer Olympics and Paralympics and is very experienced in organizing the Olympic Games."

"To exert political pressure on the Beijing Winter Olympics is actually to boycott the main principles of the Olympic Charter, because Beijing is only the host city of the Winter Olympics," said Sergey Manasaryan, adding that China has done a lot of preparation work over the past six years since 2015 when it won the bid for the 2022 Winter Olympics.

In 2022, China and Armenia will celebrate the 30th anniversary of the establishment of diplomatic relations between the two countries.

"China and Armenia both have a long history and splendid culture, and the history of friendly exchanges between the two countries lasts for more than 2,000 years," said Sergey Manasaryan, adding that China and Armenia keep a close relationship and cooperate in many fields." Armenia firmly adheres to the One-China Principle, supports China's position on the Taiwan issue, and agrees that Xinjiang, Hong Kong and Tibet affairs are China's internal affairs," he emphasized.

Since the establishment of diplomatic relations between the two countries, great progress has been made on economic and trade cooperation. Since 2009, China has been the second largest trading partner of Armenia for many consecutive years, and the scale of bilateral trade has continued to expand.

According to data from Armenia, the trade volume between the two countries is expected to reach US$1.2 billion in 2021, an increase of 35%-40% over the previous year, said Sergey Manasaryan, commenting that although the absolute value is not huge, it is already a great achievement for Armenia.

"In the future, China and Armenia can strengthen cooperation in food processing, alcoholic beverages, machinery, minerals, chemicals, and infrastructure construction." In the view of Sergey Manasaryan, Armenia is a landlocked country with a relatively small market. He hoped that the two countries can promote cooperation in the fields of transportation and logistics, such as opening direct flights, etc., after the pandemic is over. "Armenia attaches great importance to the development of science and technology, and hopes that more Chinese companies, especially technology companies, will invest in and cooperate with Armenian companies."

In 2019, China and Armenia signed a visa-free agreement, which came into effect in January 2020. Over the past two years, tourism has developed rapidly between the two countries.

"Armenia is a very friendly country. It has cliff stone carvings, ancient reliefs, temples and beautiful natural scenery, which is especially picturesque in late spring or autumn," said Manasaryan, adding that Armenia welcome more Chinese tourists to come for a visit.

Believe in a brighter future between the two countries

"The most popular vaccines in Armenia are those produced by China," said Sergey Manasaryan. Experts from China and Armenia have held many video conferences to exchange experiences. The Chinese medicine has played a very important role in the treatment of Armenian patients, he added.

Sergey Manasaryan expressed his sincere gratitude to the Chinese government and enterprises for their selfless assistance to Armenia. According to him, China's ability to control the pandemic is inseparable from the leadership of the Communist Party of China, the correct decision-making of the Chinese government, and the organization and discipline of the Chinese people. "Since the very beginning of the pandemic outbreak, China has shared pandemic information and anti-pandemic experience with other countries in an open and transparent manner. In the future, the two countries will continue to deepen cooperation to control the pandemic as soon as possible," he said.

Mr. Sergey Manasaryan has been in China for almost 6 years. "I believe that the two countries will have a brighter future, and the cooperation between two countries will take a fast track after the pandemic," he said. In his opinion, the relationship with China has a very special status in Armenia's foreign policy, and Armenia is committed to working with China in multiple aspects.

At the end of the interview, Sergey Manasaryan also conveyed his blessings through the newspaper. On the occasion of the coming of the Year of the Tiger, he hopes that the Chinese people will be healthy and enjoy a good and prosperous life.

Original Source of the original story >> Sergey Manassarian, Armenian ambassador to China, praised the Beijing winter Olympics as a high-quality and safe games