Uruguay: Sending blessings to the Beijing 2022 Winter Olympics and wishing a complete success

Uruguay: Sending blessings to the Beijing 2022 Winter Olympics and wishing a complete success 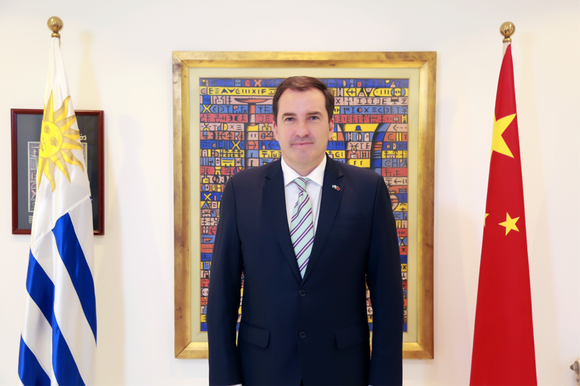 Uruguay is one of the farthest countries from China, to the point that it's capital city, Montevideo, is geographically the most distant one from Beijing.

Despite our distance, we always try to describe what Uruguay has to offer to our friends in China, wishing to captivate to the point of them planning their next trip with our country as a destination.

Uruguay is a country that encourages harmony and peace. with it's beautiful beaches, rivers, countryside and exceptional climate, it offers excellent choices all year long for every taste. It is a country that effectively balances development and the environment, with a highly egalitarian society under political, legal and social stability over the years. It is a multicultural country in which coexistence and respect are fundamental elements.

Uruguay is a country full of vigor and vitality, strategically located in Latin America and open to the whole world.

Economic and Trade relations between China and Uruguay

The year 2022 marks the 67th anniversary of Uruguay-China economic and trade relations. We would like this opportunity to briefly introduce the current situation of economic, trade and investment exchanges between the two countries and show the results we have achieved.

China has been Uruguay's main trading partner since 2013. This achievement is the result of the continuous expansion of bilateral trade, which has been accelerating since the establishment of diplomatic ties in 1988: in fact, from that point to 2021 the bilateral trade has increased by over 40 times.

Uruguay's and China's economies are highly complementary. Each year, almost a third of Uruguay's exports come to China and a fifth to a quarter of Uruguay's imports are from China. China happens to be the preferred destination of Uruguay's exports: meat - both beef and lamb - forest products and soybeans. Uruguay is also one of China's largest suppliers of wool top and whole milk powder.

Since the establishment of the strategic partnership between the two countries in 2016, the interest of Chinese companies in investing in Uruguay has since increased significantly. In fact, China's stock of direct investment in Uruguay increased over 100 times between 2007 and 2020. The investment covers a wide range of fields, such as agriculture, meat processing, information and communication technologies, ports, financial services, etc.

With an open and predictable institutional framework for foreign investment, Uruguay has the potential to become one of the most reliable destinations for Chinese investment in Latin America. For example, Uruguay consistently ranks high in international rankings of government efficiency, the prevention of corruption and the rule of law.

Furthermore, since 2018 Uruguay has officially adhered to the "One Belt, One Road" strategy, thus supporting Uruguay's role as the South Atlantic logistic hub par excellence, and its position as an efficient and safe platform from which Chinese companies can access the whole of Latin America.

The Minister of Foreign Affairs of Uruguay, Francisco Bustillo communicated to the Chinese State Counselor and Foreign Minister, Wang Yi, the strong support of Uruguay, to the holding of the 2022 Beijing Winter Olympics and Paralimpics. The Minister of Foreign Affairs of Uruguay conveyed to his counterpart in China the wish of the Uruguayan people to the Chinese people, of great successes in holding the aforementioned Olympic and Paralimpic Games, "where the People's Republic of China will show its capabilities in organizing this event of international importance".

Likewise, the National Secretary of Sports of Uruguay, Sebastián Bauzá, sent a note to the Minister of Sports of the People's Republic of China, Mr. Gou Zhongwen, wishing him "great success in holding the 2022 Beijing Winter Olympics, which all the people of China have organized with so much joy, effort and dedication".

The Embassy of Uruguay in Beijing will participate with great pleasure, together with different diplomatic officials, in different events of the 2022 Beijing Winter Olympics, to which it has been invited.

For us, it is clear that the Olympic Spirit and core values of olympism, excelence, friendship and respect should be promoted, especially during this difficult times for the world as a community.Let's go together for a shared future！

Impressions on Hong Kong and Macao

Hong Kong and Macao are key for the relationship between Uruguay and China. Our bonds with both Special Administrative Regions are quite strong, yet we are always finding new ways to keep increasing our cooperation.

The interconnection between Uruguay and Hong Kong has been very intrinsic for many decades, with a particular increasingly boost after the establishment of the Special Administrative Region. This year, we are very expectant regarding the celebrations of the 25th Anniversary of such historical moment for China and the world.

Hong Kong happens to be our second trade partner in the Asia-Pacific, only behind Mainland China. It has concentrated -for many decades- more of our exports that those done to other outstanding economies in the region, such as Japan or even South Korea. Right at this moment we are negotiating new and improved bilateral agreements and protocols, in order to offer the best possible ambiance for the development of cooperation.

Our approach to Macao has been growing, particularly in the last decade. Official contact has only been increasing and our participation at different key events has been a priority of our Embassy and Consulate General. Clearly, cooperation with relevant organizations, such as the Macao Association for the Promotion of Exchange between Asia Pacific and Latin America (MAPEAL), has made our job at this Special Administrative Region flow particularly well.

The framework for economic and trade cooperation with Macao is a prioritized Fwork in progress. During 2021 and the beginning of 2022 different protocols are being negotiated, in order to provide Uruguayan exporters with new opportunities to one of the most prosperous economies in the whole world.

Company Name: Ambassador of Uruguay to the P.R. of China

Original Source of the original story >> Uruguay: Sending blessings to the Beijing 2022 Winter Olympics and wishing a complete success