Toronto, Ontario--(Newsfile Corp. - January 17, 2023) - Romios Gold Resources Inc. (TSXV: RG) (OTCQB: RMIOF) (FSE: D4R) ("Romios Gold" or the "Company") is pleased to report that is has discovered a series of high-grade gold veins assaying from 12.65 g/t Au to 72.6 g/t Au in four of five samples on its North West claim block in the Golden Triangle of NW British Columbia. The veins appear to be controlled by a well-developed set of NW-SE trending faults.

Romios' VP of Exploration, Mr. John Biczok, P. Geo, commented, "Romios' brief 2022 exploration program on the North West claims resulted in not only the highest-grade gold assays ever found on the property but also the identification of a set of probable control structures up to 1 km long that now provide an exciting focus for our future exploration work."

"The broad extent of the high-grade gold veins discovered this year is very encouraging," stated Romios' CEO and President, Mr. Stephen Burega. "Even though some of these high-grade veins are narrow where exposed, the fact that they are spread out along a >500 m trend that is parallel to some very prominent fault lineaments nearby provides a realistic opportunity to find larger, more extensive veins in those major structures. The discovery on the North West claims is just one of the encouraging set of recent results from Romios' pipeline of grass-roots to advanced projects in this highly endowed portion of the Golden Triangle" he continued.

The area between the exposed mineralized veins is covered with a veneer of glacial till from a rapidly receding glacier. It is currently unknown if the high-grade veins sampled in 2022 are connected along a single structure, however, they are aligned in the same orientation as a prominent set of NW-SE lineaments beginning in the extensive outcrops about 200 m to the southwest (See Map 1). This set of potential controlling structures has not been specifically targeted in past years and now forms a high-priority target for future exploration. 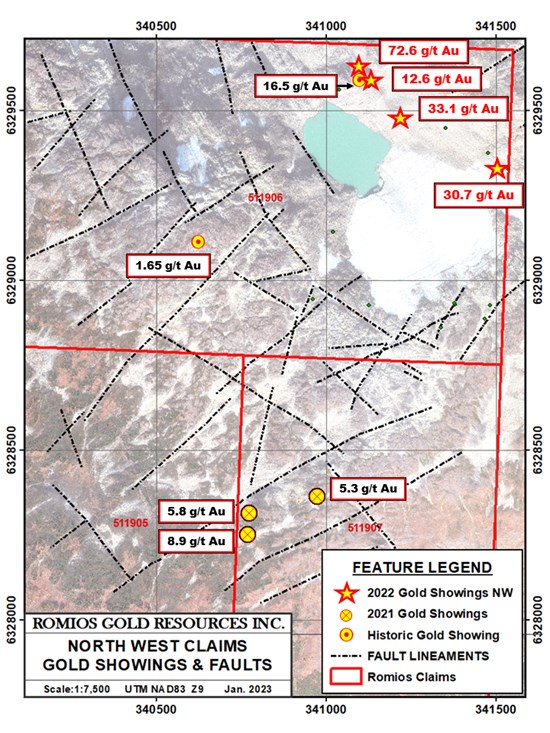 In 2021, Romios discovered three mineralized quartz + pyrite veins assaying 5.28 - 8.9 g/t Au in outcrop and boulders located 1.1 km to the SSW of the high-grade samples reported herein (see Romios news release Oct. 27, 2021) and, in 2010, another Romios crew located more modest mineralization 670 m to the SW in a quartz vein that assayed 1.65 g/t Au plus 19 g/t Ag and 0.19% Cu (Map 1). This crew also located the original high-grade sample (16.5 g/t Au) that was followed up in 2022 and resulted in the high-grade discoveries reported in this news release.

These recent gold discoveries on Romios' North West Claims block are within 4.4 km of the partially cleared road route to Teck and Newmont's enormous Galore Creek Cu-Au-Ag porphyry deposit(s) which is now in the final stages of a pre-feasibility study (See website at www.gcmc.ca). They are also just 4 km east of the Stikine River, which was a major barge route between the seaport of Wrangell, Alaska and the community of Telegraph Creek in the past (see Map 2). 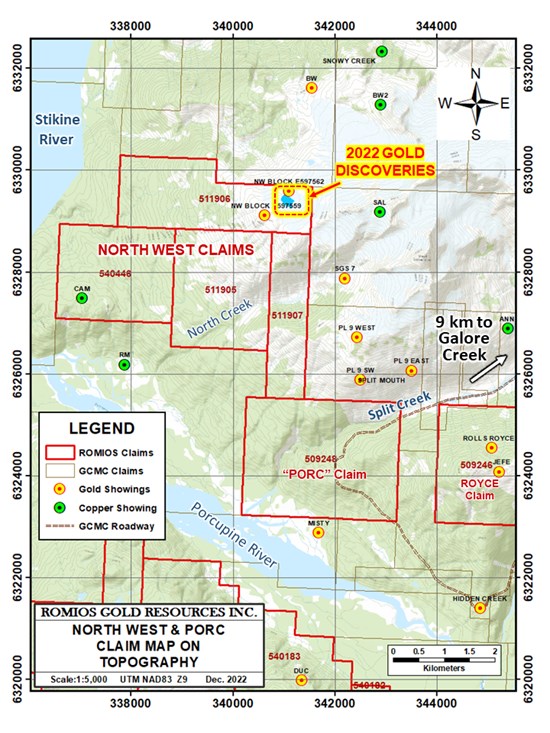 The samples discussed in this document were grab and chip samples considered representative of the outcrops and mineralization being sampled. They were submitted to the ISO/IEC 17025 accredited ALS Canada Ltd. laboratories in Terrace and Vancouver, BC for gold assay and multi-element analyses. As a matter of procedure, a rigorous quality assurance and quality control program was implemented to ensure reliable assay results by inserting alternating blanks and commercial assay standards at every 10th position in the sample series.

The technical information in this news release has been reviewed and approved by John Biczok, P. Geo., VP-Exploration for Romios Gold and a Qualified Person as defined by National Instrument 43-101. In addition to his extensive experience with several major mining companies exploring for a wide variety of ore deposit types across Canada and India, Mr. Biczok spent 12 years conducting exploration and research at the Musselwhite gold mine in NW Ontario.

Romios Gold Resources Inc. is a progressive Canadian mineral exploration company engaged in precious- and base-metal exploration, focused primarily on gold, copper and silver. It has a 100% interest in the Lundmark-Akow Lake Au-Cu property plus 4 additional claim blocks in northwestern Ontario and extensive claim holdings covering several significant porphyry copper-gold prospects in the "Golden Triangle" of British Columbia. Additional interests include the Kinkaid claims in Nevada covering numerous Au-Ag-Cu workings and two former producers: the Scossa mine property (Nevada) which is a former high-grade gold producer and the La Corne molybdenum mine property (Quebec). The Company retains an ongoing interest in several properties including a 20% carried interest in five of Honey Badger Mining's claim blocks in the Thunder Bay silver district of northwestern Ontario; a 2% NSR on McEwen Mining's Hislop gold property in Ontario; a 2% NSR on Enduro Metals' Newmont Lake Au-Cu-Ag property in BC, and the Company has signed a definitive agreement with Copperhead Resources Inc. ("Copperhead") whereby Copperhead can acquire a 75% ownership interest in Romios' Red Line Property in BC.

As part of our ongoing effort to keep investors, interested parties and stakeholders updated, we have several communication portals. If you have any questions online (Twitter, Facebook, LinkedIn) please feel free to send direct messages.

This News Release contains forward-looking statements which are typically preceded by, followed by or include the words "believes", "expects", "anticipates", "estimates", "intends", "plans" or similar expressions. Forward-looking statements are not guarantees of future performance as they involve risks, uncertainties and assumptions. We do not intend and do not assume any obligation to update these forward-looking statements and shareholders are cautioned not to put undue reliance on such statements. TSX Venture Exchange or its Regulation Services Provider (as that term is defined in the policies of the TSX Venture Exchange) do not accept responsibility for the adequacy or accuracy of this release.

To view the source version of this press release, please visit https://www.newsfilecorp.com/release/151540