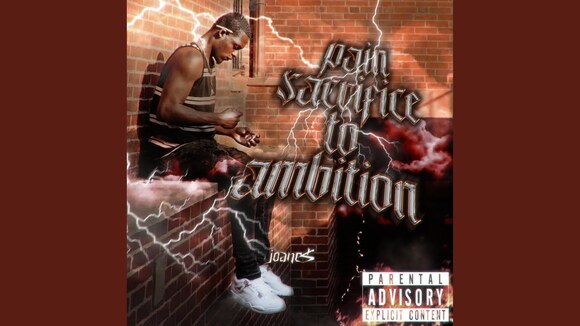 Listen to Pain, Sacrifice to Ambition on Apple Music

Joane$ is easy to pass by in the mall.  With his baseball cap, gym shorts, and the 1950s science-teacher glasses, he looks like just another young man lined up outside of Foot Locker looking to pick up the latest kicks.  Then somehow, for some reason, you notice the way he carries himself.  Was this kid in the military?  Does he come from money?  Or maybe..is he an African prince in disguise like Eddie Murphy in Coming to America?!?

Joane$’s shoulders are squared and strong and his perfectly featured face is held high with a quiet, assured power.  Nothing puffed up or macho about this guy; no glancing around to make sure he’s being noticed.  He doesn’t even seem to realize he’s beautiful.  But physical beauty is kind of easy to come by.  Energy though, that is a hard one to fake, and the air around Joane$ is heavy with the real deal: dignity, discipline, depth, power, and humility.  If this heavy energy had a color it’d be a deep, clear purple, like a King’s robes.  I’m guessing it must be the result of hardships endured, long hours, a disciplined mind and body.  It’s either that or he really is a prince in disguise.

Listen to Pain, Sacrifice to Ambition on Spotify

Immigrant Making a Difference in USA

Joanes Junior Vincent is the second son of hard-working and loving Haitian and Dominican immigrants.  After moving to Cambridge, Massachusetts when he was young, he did what many older children of full-time working parents do: he took care of his three younger siblings.  However, he did it really, really well. He ran a tight ship.  He cooked, cleaned, bathed, and comforted the babies.  His older brother was out of the house by then, so the duties were his, and he rose to the challenge.  All while being a young teen boy.

This kind of boy who rises to the needs of others before considering himself is in training to become what En Vogue & Salt-N-Pepa would call, “a mighty, mighty good man”.  And a good man is exactly what you would’ve seen if you saw Joane$ at 19 years old, working full-time managing an Olympia Sports, helping his siblings each day, and nurturing an almost two-year relationship with his girlfriend.  Joane$ maturely saved every dime he had leftover from his paycheck after he bought his girl nice dinners out and the jewelry that would make her smile.

The money left first.  All of it.  Joane$ handled everything with the calm power of knowing that if he just put in the hours of honest work, meeting with the right people at the bank, and following up in a timely and respectful manner with emails and phone calls, the fraudulent transaction would be reversed and he’d be given back the $4000 that he’d saved.  He was wrong.  The online transaction that drained his account remains a mystery.

One week after his savings were drained, Joane$ was sitting in his room with his girlfriend when he got a call from his supervisor at Olympia Sports.  The company was shutting down.  They were closing branches and J’s was one of them.  J’s services were no longer needed.  Joane$ had quickly put the call on speaker so his girlfriend could hear the full story too.  Thank God she would be there for him even though he had no money and no job.

The final blow came exactly one week later, with the help of Instagram.  She said she was “just having fun”.  Arguments ensued.  Joane$ was tasting desperation and a loss of control, and the girlfriend said, “No, Thanks”.  She was out.  Just like that.

Turning the power of his work-harder-and-longer-ethic onto his now-defunct relationship, Joane$ set his sights on winning her back.  He needed her.  He imagined that if he only had her back, he could stop his slide into the dark, murky abyss of depression.  He was panicking; clawing and scraping at the slippery sides as he was being sucked down.  This energy sped up his fall as he lost track of his self-respect and desperately tried to get his girlfriend back.  This time she said, “No way!”.  And Joane$ had to finally let go.

It was a good day for the abyss: a hopeful, hard-working, smart, sweet, and mighty, mighty good man delivered by an uncanny streak of three weeks of brutal blows.  An unexpected guest out of nowhere.  Delicious.

Weeks passed and Joane$ was still neck-deep in the abyss.  He was crying in his bed every night.  A big, impossibly beautiful, 20-year-old man unfamiliar with the dark world of depression and pain curled up in his bed, broken.  Over and over he listened to Trippie Redd’s “Deeply Scared” with the lyrics, “You been scarred too deep, I can tell, I can tell...” resonating through him.  All of Joane$’s past hurts, wrongs, and pains that had been plowed through with his discipline and determination came to the surface.  He analyzed his whole life and said it “painted a picture” for him.  Joane$ describes his last night in the abyss where he got up and went into his bathroom.  He took his shirt off and looked at himself, now 40 pounds overweight, crying in the mirror.

“The pain was telling me to do something with it”.  Without even his knowledge or intention, Joane$ had started on the artist’s path.  He was on the Hero’s journey, which is older than the mountains and binds us all together in our cycle of suffering and triumphs, but he was on the creative’s version of this journey.  He had to create something from his pain to transform it. So he started writing.  And he found his ladder out of the abyss.

Fast forward a mere six months later and Joane$ has dropped his first album.  Apparently, this is what you get when you combine a rock-solid work ethic and focus on creative inspiration.  Not a very common combination of traits, in my experience.  Joane$ set his intentions on meeting music people after filling journals with songs, and they all wanted to help him.  Every little thing fell into place.

Joane$ is, first and foremost, a lyricist.  And at the time of the album’s writing, he was a very heartbroken lyricist.  The album and Joane$’s voice are thick with yearning and aching.  His lyrics are raw and honest. Joane$ is a fan of atmospheric, LoFi chill artists and you can hear him evolving towards that through the songs.  You can taste his recent dip in the abyss in the flavor of the album, but it’s lightened by his Island vibes.  It just so happens that Joane$ is blessed with a distinct and recognizable tone to his voice and a sound that tugs at your emotions, especially when he’s in his upper register.  “All In” is the first song on the album and it was recorded in one take his very first time on the mic.  Midway through the album, “Missed Calls” steps in and steals the show as an easy hit with Island bounce that transports the listener to a sunset drive on Miami beach.

Joane$ cites his influences as Trippie Redd, JayDaYoungan, Young Boy Never Broke Again, Lil Mosey, and Phora.  He describes the life-giving process of writing and recording as being “euphoric” and he flashes his broad, exquisite smile while describing it.  “It helps me with depression, to be honest”.  Being the thoughtful soul that he is, Joane$ truly hopes to encourage other people struggling with depression to try writing and creating because it is such a magical tool.

Turns out Joane$ is actually not an African prince in disguise.  Rather, he is a disciplined and determined budding 21-year-old artist gifted with an unforgettable tone and a powerful connection to the creative source.  He's the whole package, and yes, he's still a mighty, mighty good man.