Pomsky - All You Need To Know About the Pomeranian Husky Mix - By PawsandFurs.com

A complete guide on what you need to about the Pomeranian-Husky crossbreed: Pomsky. 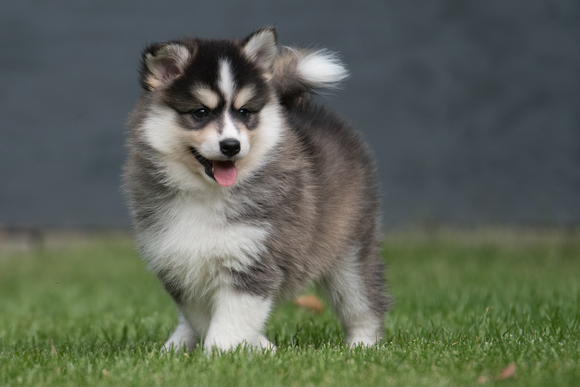 A Pomsky is not a pure breed, but rather it is a crossbreed between a Pomeranian and a Siberian husky. Their existence was a result of an internet meme. A BuzzFeed blog post went viral in 2011, and it featured images of Finnish Lapphund puppies, which claimed that they were Siberian husky and Pomeranian mixes.

This blog post was what made the internet so curious, and it increased the demand for pomsky puppies; and with this clout in place, breeders saw it as an opportunity to make it happen and also make some money out of it. This breed of dogs is considered to be designer dogs, and they are gaining popularity across North America and some parts of Europe.

Due to the fact that there is an obvious size difference between the Pomeranian and a Siberian husky, to breed these dogs naturally is very unsafe, and because of that pomskies have to be brought into the world through a process called artificial insemination.

Pomsky's unique appearance always catches the eye of dog owners around the world. It has been described as looking like a mini-wolf.

Their height ranges between 10 and 15 inches and can weigh as small as 20 all the way to 30 pounds.

They can come in a variety of different color combinations, some of which are Gray and white, Black and white, Red and white, Blue and white, Pure white, and also brown.

How to Groom Your Pomsky

The pomsky takes the coat of a Pomeranian; as such, they need constant brushing. Starting at an early age, they need to be brushed between 3 to 6 times a week.

Also, having such a cute dog would also require taking it to a professional groomer once in a while to have that professional touch on them and to have them looking dazzling always.

This mix is a heavy shedder, and they can shed almost all year round, and they even shed more during warm seasons. This also means that in a year, you will have to brush them up about twice a day for about 6 months, and failure to do so would leave you with dog hair around your house.

Asides from brushing, you also need to provide time to take care of other needs like cleaning their ears about twice a month to prevent infections, bathing them once a month or whenever they get dirty, and also clean their teeth about once or twice weekly to keep it clean and also prevent bacteria growth in them.

Their temperament falls in the category of being very unpredictable, and they would depend on each puppy's individual genetic makeup. In most cases, the pomsky would inherit the traits of both a Siberian husky and the Pomeranian, and with the traits of both parents, they are very intelligent, loving, and can be very playful, which are the major traits of a Pomeranian and Siberian husky.

Apart from their good traits, they also have some which people aren't very comfortable with. Just like their parents, they tend to be talkative dogs who would very often whine and howl and also bark unnecessarily, and they also tend to be yappy. If you are someone who is very sensitive to noise, you should put this into consideration before heading to own one of them. Like Pomeranians, the pomsky can be very protective, and they can grow to be very good guard dogs.

Despite their small size, if they see something as a threat, they would want to charge and eliminate it. Most times, it is cute, but in some other cases, it can be annoying, especially when it is unnecessary.

Some pomskies can be very nervous around children, so that should also be considered when bringing this dog into a large family.

In summary, there is no written book or guide on how this breed behaves as they are a new breed, and it is still evolving, and there isn't enough information, but for better understanding, it is important to know in most cases they would pick traits from both parents.

Pomskies are highly intelligent, and it is all thanks mainly to their Pomeranian parents. This dog responds very well to positive and reward-based training.

However, they can also want to be stubborn and be willful, just like their Siberian husky parent, and for training a dog, that's a very hard combination, so in order to train this mix properly, it would require some patience as well as positive leadership.

Failure to give them proper training would result in various behavioral problems.

For instance, just like the Pomeranians behave, pomskies tend to guard resources, and if this behavior isn't corrected early enough, it can become very serious. If you are new to owning a dog, it is better you start with the basics like teaching them how to use the potty and also teaching them how to walk on a leash. Training a puppy isn't an easy task, but it is required you train your dog in some manners while they are at a young age because if they get to realize that you can't really control them, they will exploit it and use it to their advantage as any smart puppy is very much capable of this.

Due to the fact that they are a completely new breed, it is very hard to tell if they have any hereditary health issues. There isn't much information on the health of a pomsky. It is assumed that some of the issues the parents face could also manifest in the puppies based on how genetics work.

Pomeranians suffer from dental issues, so if you have a pomsky, it is very important you take them for regular dental checkups to prevent the buildup of plaque. As for their other parent, which is husky, they can also suffer from various eye problems and hip dysplasia.

It is also important to get the lineage ratio of a pomsky from your breeder before making a purchase because different ratios would come with their own problems. For example, a 25/75 pomsky is more likely to suffer from a Pomeranian-specific illness, but regardless of the health issues they inherit, it is very important to take your dog on regular vet checkups and ensure they get enough exercise daily.

A good diet is also required for them, and also their dental health is also one of the top priorities, so it's important to know the type of dog food you feed them.

All dogs have health problems, so it is impossible to get a dog without an inherited health issue, but what is important is to raise them well and also take care of them, and you would have fewer problems.

Why you should get a Pomsky

Pomskies are dogs with lots of energy, so they would always be there to keep you engaged whenever you are bored. Due to the fact that they are very intelligent, thanks to their Pomeranian parents, they are easier to train compared to other dogs, and they give positive feedback as long as they are being rewarded. They are very small dogs, so they fit perfectly for an apartment dog.

They are very alert dogs and protective as well, so they can also be used as guard dogs in the house. These cute designer dogs can also be a source of admiration for visitors because it is very hard to resist their looks.