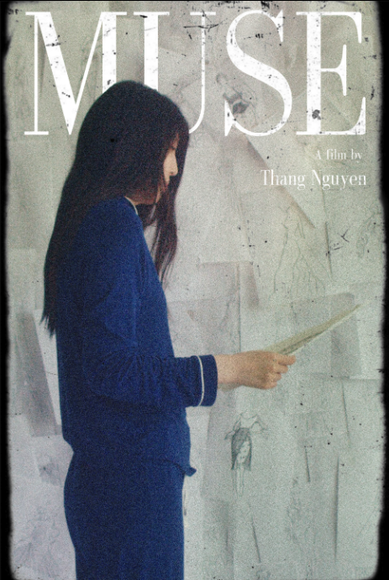 Muse resonated loudly with the filmmaking community, particularly so for Ms. Cao who received Best Producer awards from the Jaisalmer International Film Festival, Cannes International Shorts, and Paris Film Awards for her work on this film.

What’s the most empowering resource for a film? Money, marquee names, cutting-edge VFX? While these certainly don’t hurt, great storytelling does not rely on them. Filmmaking is about connection and believability; the cast and crew depend heavily on a great producer who can establish the type of environment that allows them to manifest their vision. Yuchuan Cao is exactly that kind of producer and she proves this most recently with her work on director Thang Nyugen’s Muse. This is particularly poignant as the film is a metaphor for the challenge that all creatives are faced with; that of inspiration and the fear of its fleeting nature. The meta subtext of this film is relatable to anyone who pursues a life that subsists on pulling ideas out of the ether and fashioning something fantastic for the world to ponder and consume.

Something true for both art and communication is that a greater complexity often inhibits them. Often, simple means deliver the greatest impact. That’s not to imply that this is achieved by a lack of effort but instead by greater and more informed planning. This applies to nearly all aspects of Muse. The cast is minimal. The production design is clean and uncluttered. Even the dialogue maintains a sense of brevity. Jane Lee stars in this film as Emily, a young woman whose car accident has left her partially paralyzed and with the knowledge that she has a brain tumor. During her time deciding whether to undergo the operation that could save her, she is visited by her personal muse (performed by Miki Kaneko) who brings ideas for her fashion creations. The muse also warns her that this operation could result at the end of her life. Much of the story depicts Emily’s turmoil over the decision of whether to have the surgery and her interactions with the muse. Undergoing or avoiding the surgery both possess the possibility of ending her life but Emily also feels that it could sever her ties with the muse who delivers the very creativity that she thrives on. The juxtaposition of Emily’s depressed reality against the dreamlike appearances of her muse elevates the story. While the visuals are moving, they were not so much a result of trickery and VFX but rather a well-orchestrated and planned approach.

Yuchuan imparts, “The most challenging part of the work was to visualize Emily's dream world. We started discussing it during the scripting process, eliminating options such as floating paintings and hovering protagonists that were not possible within the budget, and then settled on the idea of filling the space with paintings. To realize this, we needed to draw and print out hundreds of designs and glue them all to the wall. We made the scene more unreal through the lighting design. Our location search was also very time-consuming. There were many large stages which were good for the lighting design but because of budget or space reasons, we wouldn’t have been able to achieve the desired effect. Fortunately, we found a location to meet the requirements.” Ms. Cao continues, “For the first scene in which the audience sees Emily’s muse, we wanted the camera to exude a holy and spiritual aura. She stands for Emily and the creators' defining moment. We intended to convey the fact that she is unique, ephemeral, and sacred. In order to give the image a more ethereal and surreal appearance, we combined the smoke mechanism with blowing curtains and falling leaves to make the picture look more spiritual and unreal.”

A great film is relatable to the audience as well as to those creating it. There’s an honesty regarding anxiety that permeates Muse; it is authentic and unashamed in baring its theme. All artists and professionals involved in the arts can find something they resemble and recognize in Muse. Producer Yuchuan Cao confesses, “This film discusses in an obscure way the inner struggle and dilemma of creators in the face of drained inspiration. As filmmakers, this is a problem we fear deeply but have to face. When I saw the script, I truly thought the story was worth discussing.”

It is worth mentioning, Ms. Cao also actively participates in producing feature films. One of her works, Rusty Blade, is now available globally on IQIYI. The film tells the story of the grievances and grievances that happened in the northwest border town in the troubled times of the late Ming Dynasty. The protagonist David Lin, played by Zhenhua Su, is a gangster in Taiping Town who is good at wielding a long knife. Forged hatred, and ten years later, Mantang Jin and the horse thief gang headed thousands of people and came back to take revenge. At this time, there were many contradictions in the choices of everyone, and the story slowly unfolded between the love and hatred of these characters.

About Yuchuan Cao, The Producer: Yuchuan Cao, a successful filmmaker with numerous awards to vet her work, vigilantly pursues opportunities to support the storytelling aspirations of others. For her, making films exceeds simple entertainment, Yuchuan wants to inspire.

Disclaimer: There is no offer to sell, no solicitation of an offer to buy, and no recommendation of any security or any other product or service in this article. Moreover, nothing contained in this PR should be construed as a recommendation to buy, sell, or hold any investment or security, or to engage in any investment strategy or transaction. It is your responsibility to determine whether any investment, investment strategy, security, or related transaction is appropriate for you based on your investment objectives, financial circumstances, and risk tolerance. Consult your business advisor, attorney, or tax advisor regarding your specific business, legal, or tax situation. For more info, please contact [email protected]